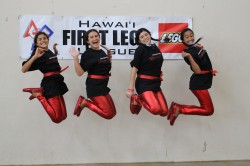 The Molokai Middle School Wizards of Bots robotics team competed in the Maui Regional First Lego League tournament two weeks ago and were awarded first alternate team to the state competition. Team members are Kaitlin DeRouin, Lana Domingo,  Marianna Campos and Taye Mowat (pictured here), coached by Jennifer Whitted. The competition was held at Seabury Hall, and the district champion was Carden Academy Mindreapers, which will be one of four Maui County teams represented at the state championship. This year’s theme was “nature’s fury” or preparation and response to natural disasters, which guided teams’ projects and presentations. Photo by Arlene DeRouin.