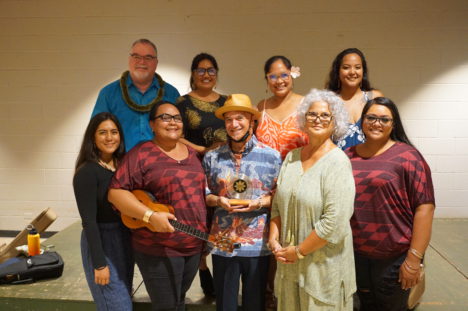 When University of Hawaii music professor Dr. Keola Donaghy arrived on Molokai in 2019 to teach a first-ever two-year Academic Subject Certificate in Hawaiian Music to Molokai students, only four participants had registered for the class. He said he almost decided to cancel the trip. But when he walked into the classroom at the UH Maui College, Molokai campus, 12 individuals greeted him.

“I asked them, ‘Why didn’t you folks sign up for the class? We almost didn’t come.’”

One of the students, a Hawaiian woman who turned out to be Molokai’s Kau’i Kapuni Manera, bluntly replied, “We didn’t think you would actually come. Now that you’re here, tell us about the program,” he recalled with a chuckle.

After spending that evening sharing mele and playing music together, all 12 students had registered for the course.

Three years later, an album they produced, with music many of them composed themselves, won a Na Hoku Hanohano award. Last Saturday, at Festivals of Aloha, the group performed for the first time since the class ended, and the group was presented with their trophy.

“Who would have thought that a mele class from Molokai would win such a prestigious award?” said Manera. “I’m just happy that we have a new generation of composers composing new material to sing and play Hawaiian music… the class was awesome.”

Those who joined the course that first day “found collective strength” to face the challenges over the next two years. The group remained intact through the pandemic, through a transition to virtual learning, and met again when it was safe to record their compilation CD, called “Awaiaulu ‘Ia E Ke Aloha No Molokai” (Bound Together By Love For Molokai). It features nine recordings, seven of which are original compositions by the students: Manera, Natalie Sambajon, Kelly Kaawa Richardson, Lehiwahiwa Ritte, Valerie Temahaga, Po’okela Napoleon, Keakaokalani Kaiama, Donald Pelekai, Jr., and Shaye Lauifi.

“It was really difficult during the pandemic, we didn’t really get to do any kind of public performances…” said Donaghy on stage last Saturday. “But I hope you folks are as proud of all these students as I am, because they really endured for two years… made it to Maui to a recording studio to complete the album and the fruit of our labor, this is their Na Hoku Hanohano award and it’s going to be proudly displayed at the Molokai Education Center.”

UH’s Institute of Hawaiian Music mentors and trains aspiring musicians, offering its first class on Molokai, Applied Hawaiian Music, in the fall of 2019. The two-year certificate includes classes in Hawaiian music, language, and culture, music theory and technology, as well as an applied music class where students work directly with Hawaiian music artists and other industry professionals.

“This project, like many others, was nearly ended by the COVID-19 pandemic of 2020 and 2021. During those trying times, the bonds that had been created between faculty, staff and students were tested, but never failed,” the CD description relates. “Everyone had other important responsibilities to attend to, but they found a collective strength in coming together through music. The experience created “he lei pili pa’a hemo ‘ole” — a lei firmly bound and never to be broken.”

The students ranged in age from 17 to mid-60s, many whom are working professionals, teachers, full-time students, as well as several aspiring to become professional musicians, according to Donaghy, who said he lived on Molokai in the early 1980s as a police officer.

“Everyone pretty much wrote their own songs… it was personal,” explained Napoleon. “I’m just really grateful.…”

Both the class itself and their mele was personal for everyone involved.

“Personally it meant a lot to me, to all of us,” said Donaghy. “I think all of us in the class developed a very special bond over the course of the class, growing together, and in particular supporting each other during the covid lockdown. Of course, I’m very aware of Molokai’s rich musical heritage, and I think even being nominated for the Na Hoku Hanohano Award speaks to the level of musical talent that is found on the island. Winning it meant that much more, I know the students are incredibly proud of the project, as I am.”