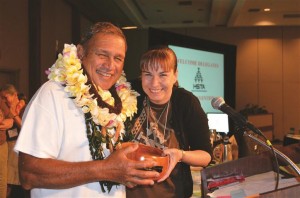 A Molokai resident who has volunteered thousands of hours to fishpond restoration was honored by the Hawaii State Teachers’ Association (HSTA) with the 2012 Friend of Youth Award. Mervin Dudoit received the award at the annual HSTA state convention on Saturday, March 30, at the Hilton Hawaiian Village in Honolulu.

The award recognizes countless citizens in Hawaii, nonprofessional educators and volunteers, working in relative obscurity and with limited budgets, who make invaluable and lasting community contributions to the education of children. The award to Uncle Mervin was made after a state-wide search and selection process. Jennifer Tsuji, Chairwoman of the Award Committee, said, “When we reviewed all the applications, Mervin Dudoit’s work stood out so strongly that we knew we had to honor him with this award.”

Diane Abraham, HSTA Molokai Chapter President, noted in the award application that Uncle Mervin has logged thousands of volunteer hours over the past seven years directing the restoration of Ali`i, an ancient fishpond on Molokai which had fallen into disuse from mangrove overgrowth. Ali`i is now an operational fishpond, guided by Ka Honua Momona (KHM), a nonprofit whose mission is to be a model of sustainability mauka a makai (from the mountains to the sea). KHM seeks to foster connections between all aspects of the island ecosystem, including the people and culture, and believes that Molokai can again return to abundance and become a self-sufficient model for all nations. The long-term goals of KHM are to develop indigenous education systems by revitalizing natural and cultural resources; and to perpetuate traditional knowledge and stewardship while evolving with modern technology. The award also noted that students from all over the state have come to study and learn from Uncle Mervin at Ali`i fishpond.

On accepting his award in front of 358 HSTA teacher delegates from around the state, Uncle Mervin said, “I thank you for recognizing the conservation work we do at Ka Honua Momona. Our fishpond teaches our children traditional Hawaiian values about the environment. If we do not teach the children about our culture, it will be lost forever. I can’t let that happen.”

Pualani Akaka, a Kualapu`u School teacher and Molokai HSTA delegate, introduced Uncle Mervin to the convention and talked about the meaning of “kahea”, to call, which epitomized the call that Uncle Mervin has answered over decades of volunteer service to his community and island. The tribute video of Uncle Mervin’s fishpond activities, prepared by Lihauanu Maioho, a Molokai High School teacher, with pictures of students working, catches of fresh fish, and monster crabs drew gasps from the audience of teachers, including Wil Okabe, HSTA President, and fisherman. Mr. Okabe personally thanked Uncle Mervin for continuing to preserve Hawaiian culture and educate the children through his work at Ka Honua Momona. Also on the podium honoring Uncle Mervin were Molokai HSTA delegates, Diane Mokuau and Laura Buller.

Also present to honor Uncle Mervin was his daughter, Tania Kaholoaa, and two of his grandchildren, Kainalu Lima, majoring in Hawaiian Studies, and Pualei Lima, a nursing major, both at UH, Manoa, and friend Malcolm Mackey.