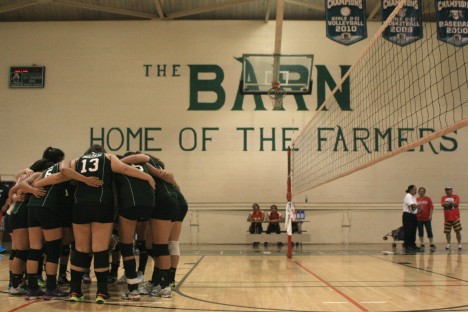 As an assistant girls’ volleyball coach at Molokai High, Billy Dudoit used to always gather his players together. He would look into their eyes, in mid-game huddles, in post-game debriefings, and tell them how to block better and serve straighter. But when he gathered them together that Saturday night, on Oct. 28, 1989, he knew his usual rhetoric wouldn’t cut it.

That evening, he and much of the Molokai community were camped out at the island’s lone airport, waiting for reports on a missing plane carrying 20 passengers, including eight Molokai High volleyball players, girls’ head coach Odetta Rapanot and school athletic director John Ino. Dudoit looked into his players’ eyes once again. He told them to stay positive, to keep their spirits up, but the next day the crushing reports came in: Flight 1712 had crashed on Molokai’s northeast coast, leaving no survivors.

“I tried to keep the [other players] together, trying to help them deal with it as a team,” said Dudoit of that tragic weekend. “… It was one of the hardest things I ever had to deal with in my life.”

It’s a well-known story within Molokai’s tightly knit volleyball circle, but in 2014, it’s a story that many of Molokai’s teenage athletes don’t know. That’s why girls’ volleyball coach Mahea Rawlins brought Dudoit and surviving players Solene Duvauchelle and Priscila Maliu to The Barn last Thursday afternoon before practice. This year, Molokai is hosting the Maui Interscholastic League (MIL) volleyball championships for the first time in school history, and with a winning regular season record, the Lady Farmers have a real shot at the state championship. But before the girls get wrapped up in dreams of states, Rawlins wants them in the right mindset.

“To me, it’s really important that you know the background of 1712, especially if you’re gonna play volleyball,” said Rawlins. “… Those are the people, those are the 10 that you look up to once you step forward into this gym.”

Flight 1712 was one of three Aloha Island Air flights carrying Molokai students and chaperones home from Maui. At the time, the boys’ and girls’ volleyball teams had coinciding seasons, and both had traveled to Maui for the MIL championships. The boys were in a rebuilding season, Dudoit remembered, and didn’t qualify for the state championships. The girls, however, took second and earned a trip to states.

“Everybody was excited. … It was just something we hardly ever accomplished,” said Dudoit. “Before it was just ‘beat Lanai,’ and we’d go to states. To represent the [whole] league was a hard battle at that time.”

Two flights carrying triumphant Molokai players made it back safely. Barbara Helm was working the night shift at Liberty House when she found out the third flight was missing. Her daughter 15-year-old daughter Natalie was on the plane, along with fellow students Lea Dunham, Leilani Ahina, Nanceen “Kaipo” Mahiai, Aloma Spencer, Testa “Travis” Ku, Jared Elia and Jovencio Ruiz. Helm raced to the airport where she and other parents waited until it closed. Aid workers set the families up with cots at the Mitchell Pauole Center, where they could support each other and stay informed. While family members sat in shock, other residents organized searches on personal boats and planes. Rawlins was six years old at the time, but her memories from that weekend are clear.

“I remember that night when my grandpa left [to help],” she said. “He launched out from Kaunakakai Harbor and drove all the way out to Halawa Point where all the boats were.… Molokai is so small as an island, but once we have a tragedy, everybody pulls together.”

When the plane was finally found, community members again banded together to support each other. They assigned couples to take care of families who’d lost loved ones in the crash. Church leaders volunteered to field a barrage of phone calls and letters. In the span of two weeks, Helm said, she and her husband Larry went to eight funerals.

“It affected the whole island; it affected the outer islands because as a state, we all fly in order to get from one place to another,” said Helm of the crash, which the National Transportation Safety Board labeled as pilot error and poor management on the part of the airline. “Anybody that lives in the state of Hawaii knew that it could’ve been one of their loved ones.”

Despite the pain, the remaining Molokai girls went on to states that year. They didn’t come home with the trophy, but they showed a community how to honor their loved ones by playing on. Although he admitted it’s something he can never forget, Dudoit said that the experience shaped him into the person he is now. He’s learned to appreciate the people and things in his life, never taking anything for granted. Helm, meanwhile, in searching for a way to deal with her loss, realized there was a real need for grief counseling and began volunteering as a bereavement coordinator. Getting into an occupation that helps others come to terms with their loss, Helm said, means first coming to terms with your own.

Twenty-five years later, volleyball is bringing this small island together again, this time to watch the MIL teams visit the Farmers on their home turf Oct. 23-25. Community members, including surviving players from 1989, have been coming to practices to scrimmage the team. Rawlins said the girls are working on their communication and their defense, locking down the key elements that allowed them to start the season on a four-game winning streak. They’ll play to win, of course, the way volleyball teams are supposed to, but they’ll also play to honor those who came before them, the way Molokai volleyball teams are supposed to.

“I think [the story of Flight 1712] really touched them,” said Rawlins, adding that the team plans to have a moment of silence before the first game.  “They really understood what heart is. That a player needs to have heart playing the game, not just on the court.”

Both Dudoit and Helm felt that Molokai’s hosting of the tournament is a well-deserved honor, and a long time coming.

“Our kids are so resilient, but they have to go through a lot just to play in a tournament,” said Helm of the off-island games. “They don’t get to sleep in their own beds. They have to travel. It’s just different, so I’m really happy that Molokai gets to host the tournament. … It’s emotional and it’s special. It’s good.”

One Response to “Molokai Keeps 1989 Memories in Play”