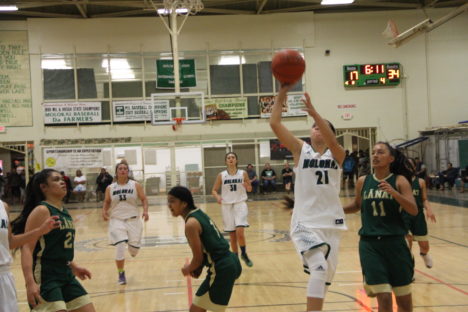 The Molokai Lady Farmers hosted the Lanai Pine Lasses last weekend at The Barn. On Friday night, in the early game of a doubleheader, Lanai beat Molokai 39-23. Kayla Garcia led the Pine Lasses with 13 points (2-3) and Camille Ledesma, Kaitlyn Derouin and Nairene Bishaw-Mokiao each had 6 points for the Lady Farmers (0-3).

“Our girls put together a solid effort on both sides of the ball,” he said. “Most importantly, our guards took care of the ball for most of the game.”

On Saturday, Molokai stayed close to Lanai and was only down 8 at halftime and cut the lead to 40-34 after three quarters but the Pine Lasses had a strong fourth quarter. They outscored the Lady Farmers 15-6 to win the game 55-40 and complete a weekend sweep at The Barn.

Coach Lee Derouin continues to be positive and know his team will get better.

“The coaching staff is proud of the girls defensive intensity and hard work this past weekend and we look forward to continue to keep improving each day in practice and each game,” he said.

Yumol had some nice comments about the Farmers and Saturday’s game.

“The theme for this game for us was to match or raise the intensity that the Lady Farmers were going to bring to the game and our girls stepped up to the plate,” he said. “Coach Lee has a championship program and we needed to be ready.  While we allowed more points than we would have liked, our offense and transition was able to make baskets.  We’re starting to hit our stride but we are not quite there yet.”

Both the boys’ and girls’ teams will host Seabury this weekend and Molokai will host this year’s MIL Girls Basketball Tournament on Jan. 26-28 at The Barn. 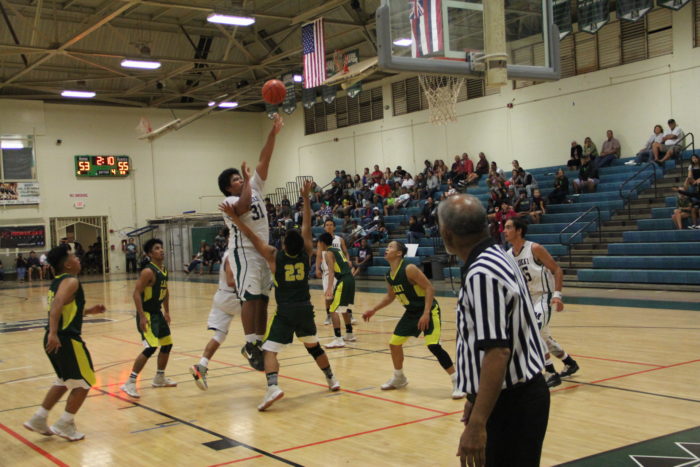 It was a “Barnburner” at The Barn last Friday night in the second game of the MIL Basketball doubleheader as the Molokai Farmers Boys Basketball team lost to the Lanai Pine Lads 61-59 on a last second buzzer beater by Morgan Jonas. The score was tied at 59 after senior guard Edel Mark Alvarez hit a layup and then Lanai inbounded and called time out to set up the game winning shot. Lanai was led by junior Arjen Uminga with 19 points and Nighel Calderon added 12 points. The Farmers were led by Kaina Adolpho and Aaron Rapanot with 15 points apiece. Alvarez added 10 points. Lanai improved to 1-2 on the season and Molokai lost its first game of the young season 2-1.

“[It was a] great game for the Pine Lads and the Farmers in the Barn,” he said. “We played hard and just came up short in the last few seconds.”

Lanai Head Coach Jimmy Fernandez has coached many games at The Barn and said he knew it would be a hard fought game.

“It’s always an intense and competitive game with the Farmers,” he said. “They are well coached and play hard to the end.”

On Saturday, the Farmers and the Pine Lads put on another show of exciting basketball, and Molokai prevailed in overtime to win 47-42. After a slow start and trailing after the first quarter 13-5, the Farmers were only down one at the half 21-20. Molokai led 30-28 after the third quarter but the Pine Lads came back to tie the score at 38 to force overtime. The Farmers then outscored Lanai 9-5 in the extra period to win 47-42 and earn the split of the weekend games.

Lanai (1-3) was led by John Baltero and Calderon who both had 15 points. Molokai (3-1) was led by Adolpho with 13 points. Alvarez and Michael Sterner added 10 each and Shraedon Naeole-Starkey finished with seven.

“I was pleased to see us get the ball inside and trust our big men with touches,” said Danner of Saturday’s game. “They work so hard just to get position and rebound as well and it was nice to see our ball movement into the post.”

The Farmers will host undefeated (4-0) Seabury this weekend in a battle for first place in the MIL DIV II Boys Basketball League and Danner is very appreciative of the support.

“I’d like to thank all the Farmer Nation fans for coming out this past weekend and we are looking forward to our next game,” he said. “Please come out and join us.”