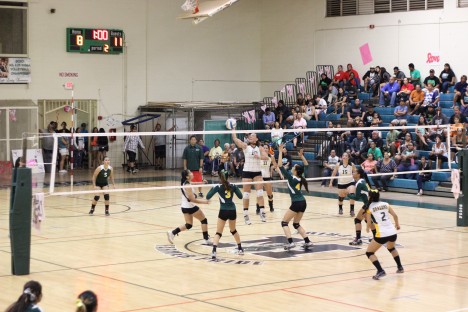 For three nights last week, Molokai High became the epicenter of Maui Interscholastic League (MIL) volleyball, as all six Division II teams gathered in The Barn for the first ever MIL Volleyball Championships on Molokai. The tournament also coincided with the 25-year anniversary of the airplane crash that took the lives of several Molokai volleyball players and coaches flying home from the 1989 MILs on Maui.

“I think it was a real honor to have it here this year,” said senior Rebecka Adolpho. “On the 25th anniversary of that plane crash, to be able to represent our school, represent all the people here, it was just a great, great honor for us.”

In the first round, Molokai beat the Maui Prep Na Pueo in three quick sets, 25-12, 25-15, 25-13, but the Hana Dragons eliminated the Lady Farmers from the tournament in the second round with another three-set contest, 25-10, 25-23, 25-14. Hana fell to Seabury Hall the next day in the championship game. The Spartans are now regular season and MIL tournament champions, while Molokai closed out the season in third place.

“Emotions were high,” said head coach Mahea Rawlins after Molokai won the first game, against Maui Prep. “It was really good just seeing all the support from the community.… Nice to see this gym crowded again.”

Against Na Pueo, Molokai outside hitter Shanrese “Lehiwa” Pedro dominated the edges with 11 kills, while middle blocker Adolpho and setter/defensive specialist Precious Rawlins notched eight kills apiece. Precious Rawlins also served up eight aces, several of which helped Molokai scramble out of a close second set. The Lady Farmers had little trouble with the first and third sets, racing off to quick leads that Na Pueo were unable to challenge.

“The best [thing] we did was our communication,” said freshman outside hitter Shaelyn McCutcheon. “… Everybody came together to work as a team. We didn’t just leave one out.”

Molokai faced a bigger challenge against Hana, which, besides Seabury, was the only team to beat Molokai this season.  After struggling with ball control against hard-hitting Hana in the first set, the Lady Farmers pulled off a gritty second set, bolstered by the team’s strong blocking at the net. They fought the Dragons for every point and were tied for most of the match before Hana finally inched past for the win. 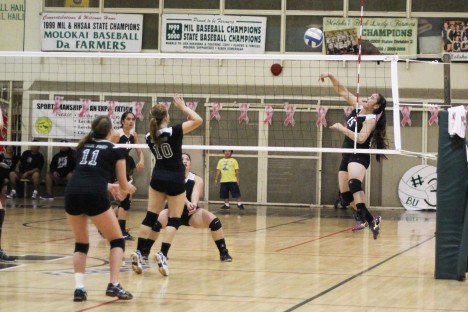 Brooke Keli`iho`omalu thwacks one over the net. Photo by Colleen Uechi.

However, Molokai’s players also made sure the tournament wasn’t just about the games. In remembrance of the 20 passengers who died on Flight 1712, the girls’ volleyball team decked out The Barn in pink, pasting pink cutout ribbons, pink streamers and inspirational signs throughout the gym, with the words “Never Forgotten” written in pink on the far gym wall. Before the game, survivors and families of the victims were honored with lei and recognition.

Mahea Rawlins said the girls put up the streamers and signs without any prompting from their coaches.

“They did it all themselves,” she said. “I came in [Thursday] at about two, and it was like this. I had to sit back and actually look around and be like, ‘wow.’”

With the season now over, Coach Rawlins said she will miss key senior hitters and the leadership they provided in their own different ways, some as quiet, laidback leaders, others as high-octane, emotional leaders, and others as motherly figures. Adolpho, who along with Pedro, Kiana Simmons and Kelsie Espiritu-Tanabe will say goodbye to the team, said in all the sports she’s played, this year’s volleyball team has had the most interesting personalities.

“They’re not afraid to be who they are all the time,” said Adolpho. “We’ve grown to become sisters.… You’re always gonna remember something about [a person] that’s always gonna make you laugh.”

“It’s been a great experience for our kids, for the island to see all six Division II schools come over here to Molokai,” said interim athletic director Lee DeRouin. “We would love to host the tournament again.”