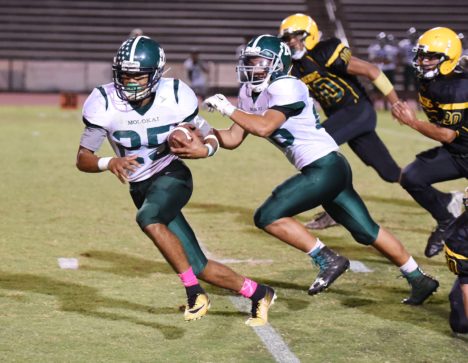 It’s official: for the first time, Molokai will host the eight-man football Maui Interscholastic Championship at their home field on Sept. 30. The Farmers clinched the regular season championship by going undefeated after winning the last regular season game against Hana last Thursday, 48-6. They will play Lanai this Saturday at 1 p.m. for the championship game. As two-time champs, Molokai is going for a three-peat for the first time in the program’s history.

Head Coach Mike Kahale said after struggling offensively at the start of their last two games, the team got started in the right direction early against Hana.

“Our defense played a stellar game holding Hana scoreless in the first half and limiting any kind of offensive production,” he said. “It was a successful trip to Maui on all fronts. A lot of our young guys got quality minutes and had the opportunity to play in War Memorial stadium under the lights. Hopefully someday we will get to do the same. Friday Night Lights on Molokai would be awesome! It is championship week for us, we will be ready.”

Hauoli Caparida said the team will be working hard this week. 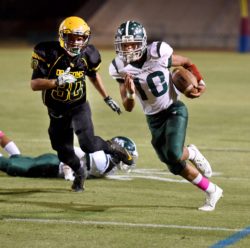 “It’s the first time we’ll be seeing Lanai in the championship, and even though we had beaten them in the regular season, that doesn’t mean we take them lightly,” he said. “We need to continue to work hard this last week and thrive for our third year MIL Championship.”

“I am very excited and looking forward to hosting the championship game here on Molokai knowing that this is gonna be my last game played here, I want to end it with a bang,” said the senior. “Our team is as ready as can be. We have worked so hard every day at practice preparing ourselves for this moment. With the strong bond our team has built and with the community behind our back, Molokai will be rocking.”