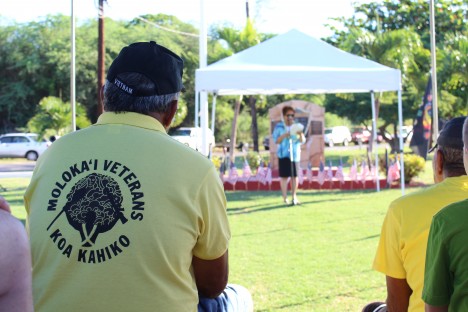 Molokai is far quieter and slower than a battlefield abroad, but for the island’s war veterans, the Friendly Isle is exactly where they want to be.

On Nov. 11, residents and veterans gathered in Kaunakakai’s Memorial Park to honor those who dedicated their lives to defending the country. The ceremony included the singing of the national and state anthems, speeches and short musical performances.

Maui County Councilmember Stacy Helm Crivello thanked the veterans and the families for their service and sacrifices. Like the biblical prophet Isaiah, she said, veterans, too, responded unselfishly to a call to serve.

“When our nation was attacked more than 70 years ago and again just a few years ago, Lady Liberty cried out in her pain and anguish, ‘Whom shall I send?’” Crivello said. “… And you responded.”

Organizers set up 18 American flags in remembrance of the 18 Molokai soldiers who were lost in World War II, the Korean War and the Vietnam War. Molokai resident David Nanod, a veteran of the Army and National Guard, read these 18 names as Makaiwi rang a bell for each. Doves were released at the end of the service.

Molokai resident Lazlo Toth, a Navy veteran who served in Vietnam and Guam, said for him Veteran’s Day is not about himself but more about his father Robert Toth, a former Marine who spent his 19th birthday at Iwo Jima.

“I do it in honor of him,” said the younger Toth. “What I did was insignificant [in comparison].”

According to Makaiwi, joint commander of Molokai Veterans Caring for Veterans and Molokai’s Veterans of Foreign Wars post, there are approximately 400 veterans on island.