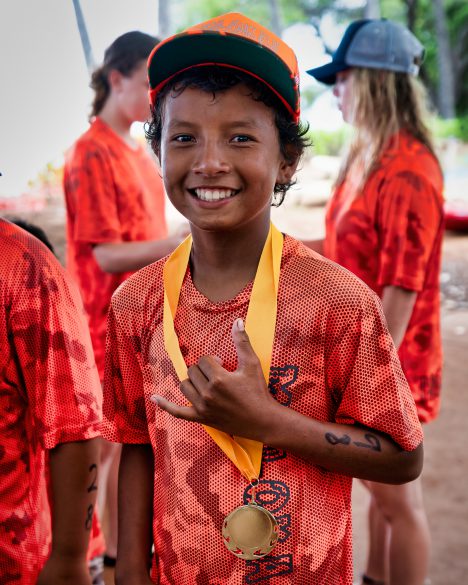 Day two of the Molokai Holokai Ho’olaule’a exceeded all expectations with 116 registered participants in the combined long from Kamalo to the Molokai Community Health Center. The main course was 10 miles, with a short course of five miles and keiki and makua course of 3/4 mile. Winds were easterly, a little on the lighter side but still perfect for the racers. The fleet was well rounded with 39 in the OC/ski division, 21 in the SUP, a youth OC 6 team and most impressive, 50 in the keiki division.

The day prior, while the racers were racing from Maui, about 50 kids showed up to clean up the harbor pulling out all kinds of rubbish from both sides of the pier. Their work was impressive for the few hours they put in.

Highlights of the day two go to our keiki, particularly 13-year-old Nalu Kaina-Kahoalii, who won the Aloha Spirit award. The keiki and makua race was fun to watch, with youngsters ranging from one and up, sitting on a parent’s board and 50 little orange shirts and hats paddling/cruising the ¾ mile on SUPs, kayaks and OC1 canoes.

Other notable young Molokai paddlers included 15-year-old Kamalani Kanawaliwali, who paddled the 10-mile course in her OC2 and took second in her division to Jerome and Choppie Kalama. Seventeen-year-old Alex Mawae crushed it on his SUP, finishing second overall in his division and first youth. Visiting young paddlers 16-year-old Slater Fleck from Maui and 10-year-old sensation Bobo Gallagher did amazing with Slater dominating the overall title and the youth unlimited division. Bobo completed 37 miles of racing on Saturday and still found the energy to do the keiki and makua race on Sunday. He finished second overall in the combined divisions using his foil from Maui and then raced in the 14 division on Sunday. In our OC6 division racing five miles, the Forcinelli kids with 16-year-old Arroyo, Angelo, 15, and Arcadian, 12, did amazing with their first long distant race in their OC6 canoe!

The Molokai paddlers did superbly in the adult division, with Troy Heen taking third in the Kamalo run, Liliana Napolean taking second in the women’s and Camie Kimball taking third. Our veteran paddlers Jerome and Choppie Kalama retained their OC2 title, taking first place. Combined Maui and Molokai resident Kai Bartlett took the overall win on both Sunday and the combined days on his surf ski. Napoleon won the overall of the combined days and Makena Fernandez took the third overall in the men’s division and top Molokai competitor for the combined days. Tentative dates for 2020 will be June 19-21.