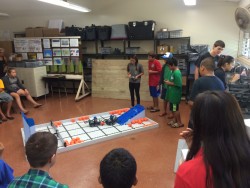 On Saturday, Oct. 24, STEM Robotics was proud to host the first Robotics League competition to ever take place in the State of Hawaii right here on Molokai. The Molokai VEX IQ League was hosted at Molokai Middle School with robotics teams from Molokai Middle (MMS), Akaula, Kaunakakai Elementary, and Kilohana Elementary.

Both middle and elementary school teams were part of the event, with four middle-school teams and seven elementary teams participating. In Teamwork Competition, two teams (robots) are randomly paired to score the most points possible by working together. Each team had to compete in four matches and were paired with teams that may have been from their own school and from either middle or elementary divisions. There were 11 teams at the competition with 22 qualification matches for the day’s event.

This year’s VEX IQ Challenge is called Bank Shot where students construct bots to place plastic three-inch balls into a low goal (one point each) or shoot or dump balls into a higher, more distant high goal (three points each) all within one-minute, which can be viewed on YouTube at youtube.com/watch?v=X9GIF34HEvE. Students can score 16 more points by emptying out all balls from cut-outs on a ramp, score 10 more points for getting their robot on the ramp, or score 25 more points for getting two robots on the ramp.

For more information and to see the Qualification Results of your teams, visit the Molokai VEX IQ League webpage at robotevents.com/robot-competitions/vex-iq-challenge/re-viqc-15-4068.html