Just before 100 canoes started launching from Hale O Lono Harbor Sunday morning, Wa`akapaemua team captain and steersman Bozo Dudoit hugged each of his teammates, one by one. While neighboring teams had loud chants and practiced slogans, the men’s open team from Wa`akapaemua Canoe Club gathered their hands in the middle and shouted just one word –Molokai. They picked up their six-man outrigger canoe and departed for the 41-mile legendary Molokai Hoe course to Oahu. 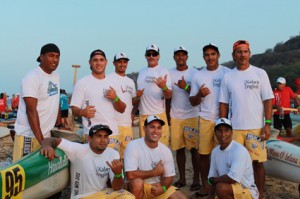 “We’ve trained mentally and physically,” said Dudoit a day before the race. “But I’ve never paddled 40 miles directly into the wind, so it’ll be an interesting experience.”
Conditions were especially poor for paddlers as southerly winds and flat surf made the race across the Ka`iwi Channel particularly difficult for the teams that competed this year. First-place finishers, Shell Va`a from Tahiti, completed the race with a time of 5:15:49, far behind the 4:30:54 record they set last year.

Wa`akapaemua finished 16th out of 100 teams with a time of 6:02:30. Though they just missed their goal of finishing in the top 15, Dudoit said he is still pleased with the outcome.

“Considering the conditions –wind in our face and paddling into bumps going upwind which we don’t do often on Molokai –I was happy with how we did,” said Dudoit after the race. “It was brutal, it was hard, but I’m happy and the boys are happy.”

Another goal set by the team this season was to compete with and become one of the top contenders in Maui County, which Wa`akapaemua did today. They finished ahead of all Maui teams except Team Primo, which finished fifth with a time of 5:39:34.

Every year, thousands of paddlers travel from around the world to Molokai to participate in the Molokai Hoe, which has been described as the world’s “most prestigious outrigger canoe race.” This year marks the 61st annual Molokai Hoe race.

This year, Molokai veterans had a special connection to the race. Members of the Molokai Veterans Caring for Veterans hosted a team of active military and vets who paddled in the race to raise awareness and funds for non-profits organizations like the Wounded Warrior Project that support military personnel and families.