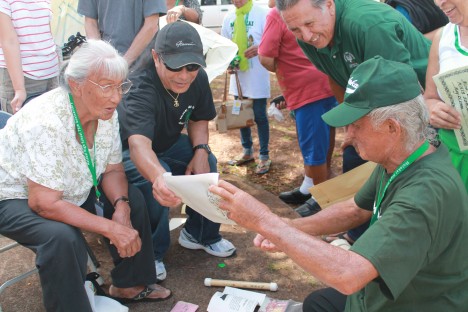 Richard Otsuji clenched a black-and-white photo of 24 Molokai High School (MHS) seniors, the entire graduating class of 1942, in his hands early last Saturday morning. After waiting 25 years to uproot the time capsule buried during MHS’ 50th anniversary in 1989, Otsuji and many alumni found digging up the past brought a rush of emotion.

“I can remember every detail that happened here. I even shock myself sometimes,” said Otsuji, a former South Pacific WWII war crime investigator, with a wholehearted laugh while pointing his class photo. “I can name you every person in [this picture], their first name and where they live.”

Otsuji, who now resides on Oahu, is one of the oldest MHS alumni and has never missed a school occasion to fellowship with his former classmates. During his reigning day on campus, Otsuji was a quarterback for the football team. He shared a team picture, found in the time capsule that was filled with other sentimental novelties, with alumni and friends during the 75th anniversary celebration of MHS.

Alumni traveled far and wide to their old stomping grounds on campus to commemorate 75 years of educating young minds and to look back on how the school has transformed through the years. 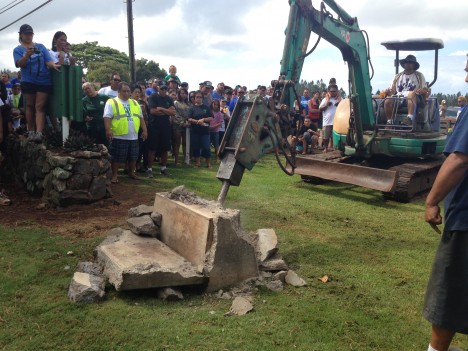 “Our teaching from before was a little bit different,” said James “Jimmy” Duvauchelle, a fourth generation Molokai paniolo who graduated in 1962. “We had Molokai High School Dairy where we would milk the cows and distribute all the milk. We were self-sustainable as far as milk, and we had chickens, supplied eggs and the vegetables.”

When MHS opened its doors in 1939, the school campus looked nothing like it does today. Kupuna recall raising animals and growing crops on a plantation directly across from the school.

“In 1939, we built the school dormitory for students in agriculture,” Otsuji said as he pointed to the field across from the campus which used to be a school farm. “We had poultry, dairy and piggery farms here. We had several acres of corn, and every year when it was harvest time we would invite the school to come down and enjoy the corn.”

The Farmers of the past also witnessed historic milestones that changed Hawaii forever.

As history was taking place, Davis built lifelong friendships with students at MHS. Davis said watching new graduates walk the stage reminded him of how many of his classmates left Molokai to find employment elsewhere.

He said that even though his fellow classmates live off island across the country, their roots are still in Molokai and they always find their way home for school events.

Life was different in the early years of MHS, when the Farmer mascot had a very literal meaning. 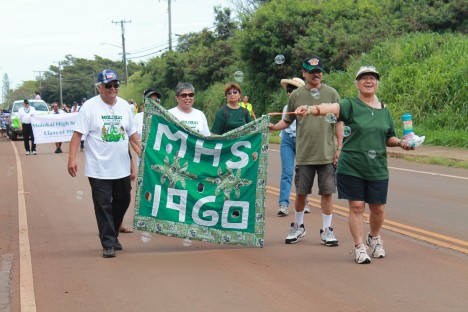 “The biggest change when you look back is no more pineapple fields,” said Ed Misaki, The Nature Conservancy’s Molokai Program Director who graduated in 1974. “This was all pineapple field around here. We never thought Molokai High School would be without pineapple.”

The 1970s were the heyday of pineapple farming in Molokai, according to Misaki.

Back then, Coffees of Hawaii was a Del Monte headquarters and students worked in the pineapple field when they weren’t in class.

“It was a definite plantation town,” Misaki said of the Kaulapu`u and Ho`olehua communities. “People also leased out their homestead land to the pineapple companies, so all the old homes had a lot of pineapple fields.”

Misaki was among hundreds of former administrators, teachers and students to celebrate the school’s 75th anniversary with numerous festivities on school grounds throughout Memorial weekend. 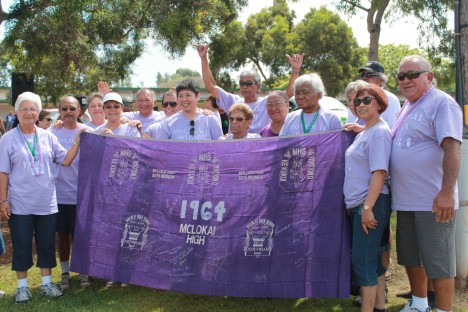 MHS entertained alumni with a parade Saturday morning, a lu`au in the Barn that evening, kickball games with rivaling classes and a ho`olaulea in the afternoon. The fun-filled weekend also included a Kendama contest, local entertainment, a silent auction and other activities for kupuna and youngsters alike to enjoy. The time capsule was reburied during the closing ceremonies Monday.

“In the beginning it was very stressful to organize it, but when you see everybody happy it’s all worth it,” said Melody English Alcon, alumni president who graduated in1974. “Plus, it’s my 40th anniversary too, so it’s awesome to have everybody home.”

Alcon said her favorite memory from walking the halls of MHS was the love of her classmates. This mana`o is true for many alumni.

Nante Manangan moved to Molokai from the Philippines at the start of seventh grade. Manangan graduated in 1974 and said he remembers the close-knit community welcoming him in and quickly making friends at MHS.

“It’s really great to see old classmates come back from everywhere,” Manangan said. “Molokai High School is a small school and we were tight as classmates. That’s one thing I really liked about our classmates that remains now.”

Although students today are not cultivating acres of corn or milking cows on campus, the graduates old and young perpetuate honoring the past and embracing the future.

“All my life, my heart has been with Molokai High School,” Otsuji said. “I was in tears when I saw the graduating class walk because we didn’t have a ceremony before when I was here. I had tears in my eyes and continue to promote Molokai everywhere I go.”