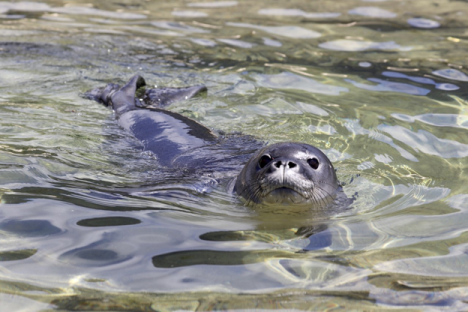 Molokai has had the most endangered Hawaiian monk seal births in the state so far this year, as the typical pupping period draws to a close. Out of 18 births so far in the main Hawaiian Islands, 11 were on Molokai, according to a July 1 update from National Oceanic and Atmospheric Administration (NOAA) Fisheries. Monk seal pups are normally born in the spring and summer, though they can be born at any time of year, stated the NOAA report.

Monk seals mothers usually nurse their pups for five to seven weeks, during which time pups often increase their weight from 30 pounds at birth to nearly 200 pounds. Most females return to the beach of their birth to deliver their own pups. With many beaches and parks closed this season due to COVID-19, many monk seal mothers and young enjoyed quieter-than-usual conditions this year. Staff and volunteers continued to perform occasional monitoring, however, and all pups born during this time have weaned successfully, according to NOAA.