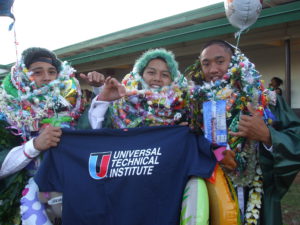 Three Molokai grads are headed to the Universal Technical Institute (UTI) in Avondale, Arizona after receiving financial assistance from the UTI Foundation. Jordan Gorospe, Kailen Inouye and James Corpuz are following in the footsteps of another Molokai graduate, who attended UTI last year and took a job in a Louisiana oil field.

The three students will begin classes on July 9. The opportunity will allow them to obtain careers as technicians. The grant was made possible through Hawaiian Island Fund, a relatively new funding program for Hawaiian students, according to Veronica Meury, vice president and executive director of the UTI Foundation. Meury said the foundation is always seeking donations to help sustain this unique fund and help more deserving students.