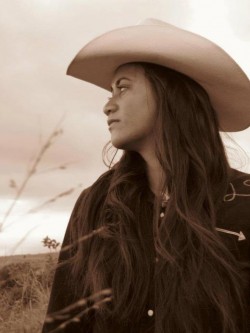 Last month, Molokai’s Cheyanne Kauionalani Duvauchelle Keliihoomalu got a surprising phone call. She was asked to represent Molokai, Hawaii and the paniolo heritage at the Miss Rodeo America Pageant in Las Vegas this December.

“They called out of the blue and asked if I wanted to do [the national pageant],” said Keliihoomalu. “I had to think about it because that only gave me four months to prepare and usually girls in the mainland have at least a year to prepare.”

It turns out there was no Miss Rodeo Hawaii last year, and this year’s sole contestant turned out to be ineligible. So unbeknownst to her, Keliihoomalu was next in line to represent the competition at the national level.

She said yes, and it’s been a whirlwind for her ever since. With just a few months to get ready to be judged on horsemanship, knowledge of rodeo, appearance and personality, she said she’s got a lot on her plate.

“It’s all so new to me, and I’m still working on my confidence and not being so shy,” she admitted. “Miss Rodeo Hawaii is the ambassador for rodeo [in the state], and because we have our own paniolo heritage, it’s representing that as well.”

Keliihoomalu explained that she has to study a rulebook and will have to pass a written test on its content. During a luncheon event, judges will additionally ask contestants a question in front of everyone. She also has to prepare and give a speech about Hawaii.

And that’s only part of the challenge.

“I have to practice my horsemanship,” said Keliihoomalu, who grew up with rodeo in Maunaloa but said she hasn’t competed much since high school. “When we go to Vegas, the horses are numbered and we have draw a number out of a hat for our horse. So the practice is to get as much exposure to different horses.”

The cowgirls will be riding as part of the Wrangler’s National Finals Rodeo held at the MGM Grand Hotel and Casino. Once they pick their mount, contestants have to complete a reigning pattern, or set configuration in the ring with lead and speed changes. To add to the challenge, Keliihoomalu said none of the horses they’ll be riding in the pageant are trained as reigning horses.

But event organizer Lu Faborito, who also has family ties to Molokai, has no doubt Keliihoomalu will pull it off.

“We know she will bring a lot of Hawaii to the Miss Rodeo America Pageant,” said Faborito. “This history of her family is so unique. The girls who have gone… their roots are not as deep. That’s what we’re gonna show.”

Growing up in the Duvauchelle ohana, Keliihoomalu said she started riding early.

“I started entering rodeos when I was four years old,” she said. “It was so awesome. In those days, we used to have night rodeos [in Maunaloa] and everyone would come out. It was so much fun.”

After graduating high school, Keliihoomalu went on to attend the University of Hawaii in Hilo and recently graduated with a Bachelor’s of Science in Animal Science and a minor in mathematics. She realized partway through school that she didn’t want to become a veterinarian, and is now considering taking classes to become a certified nurse assistant as one possibility for her future.

Winners of Miss Rodeo America’s many categories win scholarships, so Keliihoomalu said if she does well, she can earn money to be used for school. Faborito said at least three of the seven girls from Hawaii who have competed nationally have returned home with scholarships.

In the meantime, Keliihoomalu is focused on raising the money she needs just to attend the Vegas five-day event. Faborito said they have to raise $5,000 for the trip to cover airfare, clothing for the many costume changes required and other expenses. Faborito asked those wishing to support Keliihoomalu to make checks payable to Miss Rodeo Hawaii Pageant and mail them to Miss Rodeo Hawaii Program, 87-839 Farrington Highway, Waianae, Hawaii 96792.  Faborito said they will recognize sponsors in Vegas. Contact her with any questions, 808-668-9006 or kaluhiokalanik@aol.com.

“I feel very honored,” said Keliihoomalu of representing Molokai and Hawaii. “This is something I’ve been working toward since high school. Just to have this opportunity is very exciting.”