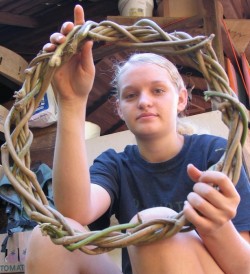 By Robin and Dano Gorsich

Molokai girl Makalele Gorsich graduated with honors from UH Hilo on May 11.  She earned a BA in Psychology and an Educational Certificate in Early Childhood Elementary Education.  In four years at the University she achieved a cumulative grade point average of 4.0.  In her Junior and Senior years she was named as a UH Presidential Scholar, the only member of her graduating class to receive this honor.  This May she received the Outstanding Psychology Student of the Year Award, the first time this award had been bestowed in a number of years.

Makalele is the daughter of Robin and Daniel Gorsich of Waialua Valley, Molokai.  She attended Kilohana Elementary school and Molokai Middle School.  She was in the class of 2008 at Molokai High School for one year. She home schooled for her last three years and received her GED.  Following this she went to Michigan to volunteer at Lou-Helen Baha’i school for a year.  She then returned to Hawaii Island to attend the University of Hawaii at Hilo.

Makalele was in Aunty April Kealoha’s Hula Halau O Kilohana from the age of 4 in 1994 through age 16.

After graduating from UH Hilo, she was recommended by her department head and accepted a paid two year internship at the Laboratory of Neuropsychology, part of the prestigious National Institute of Mental Health (NIMH), a division of the National Institute of Health in Bethesda, Maryland.  She is working there now.  After the internship she plans to pursue a PHD in Neuroscience.

One Response to “Molokai Girl Excels in Neuroscience”