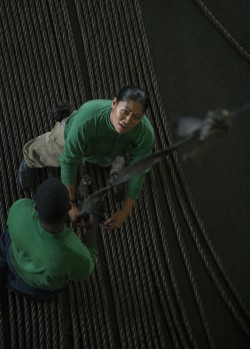 Chief Aviation Boatswain’s Mate (Equipment) Cassandra Poepoe of the U.S. Navy, from Molokai, monitors a new arresting gear wire as it is raised from the hangar bay to the flight deck in the hangar bay of the Nimitz-class aircraft carrier USS Carl Vinson (CVN 70). Carl Vinson and its embarked air wing, Carrier Air Wing (CVW) 17, are on deployment in the 7th Fleet area of operations supporting security and stability in the Indo-Asia-Pacific region.