Molokai Getting Ready for 2017-18 Wrestling Season 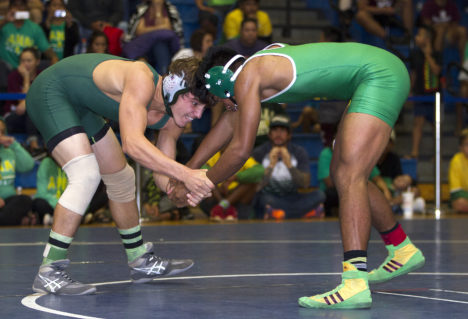 The 2017-18 wrestling season for the Molokai High School Farmer Boys and Girls has already begun, with regular practices having been underway for several weeks. The preseason tournament season begins on Maui Dec. 8-9, with the Maui Invitational Tournament. The regular season begins only a few days after Christmas, on Dec. 27.

“This year could prove to be an exciting season for Farmer Wrestling,” head coach Randy Manley said. “The boy’s team is led by a strong core of seniors: Diego DePonte, Caele Manley and Hauole Caparida. These seniors along with junior, Tekoa Torres-Umi, spent part of their summer training on the Mainland and wrestling in a multi-day national tournament in Idaho. All four are excited about their prospects in the MIL and on the state level.”

Several of the Farmer Girl wrestlers also made the trip to the Mainland this summer, in preparation for the upcoming season.

“Seniors Martika English, Luhiehua Pedro and Kamahina Kaiama-Kanuha will lead a formidable group of returning and first year wrestlers. The Lady Farmers have a legitimate shot at one of the top two spots in the MIL this season,” Manley said.

The Molokai community will have two opportunities to cheer on both girls and boys teams this season. The first opportunity will be on Friday, Dec. 1 at 7 p.m. with the Green and White inter-squad dual meet. The team will be split in two and compete against each other at the Barn. It’s an opportunity for the team to compete in a friendly environment and give friends and family an opportunity to get acquainted with this year’s teams.

Farmer Wrestling will be hosting a tournament on Friday and Saturday, Jan. 26 and 27. This two-day battle at the Barn will include teams from Lahainaluna, Maui High, Baldwin, King K, Hana, Lanai and Kamehameha Maui.