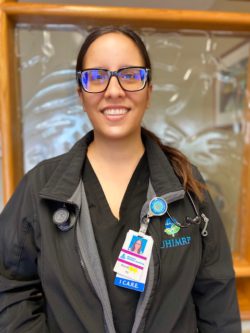 “’Doctor’ was never in my life plan,” said Dr. Randi Olds, MD, who has moved to Molokai from Kauai to serve the island’s rural community at the Molokai General Hospital Outpatient Clinic.

Her ‘life plan’ changed, however, when she attended community college in Las Vegas after graduating from Kamehameha Schools, initially majoring in business.

As the first person in her family to go to college, having someone believe in her, push her to do to well and put her in touch with clinicians and doctors made a big difference for Olds, and her professor eventually swayed her to pursue the profession.

She worked restaurant jobs to put herself through her undergraduate studies and went on to attend medical school at University of Hawaii.

“I never thought, coming from a small town on Kauai, I’d ever be a doctor,” Olds said. The only doctors she knew growing up were pediatricians and family doctors, so she chose a path to become a primary care provider.

She completed her residency on Oahu in internal medicine, an area of primary care that focuses on in-depth adult care for complex, high risk illnesses and those with multiple medical problems, Olds said. Though she loves children, she found during her training rotations she “didn’t have the heart” to see children sick and in pain every day, so she treats patients over the age of 18.

She was offered a job at Queen’s Medical Center following her residency but didn’t want to settle on Oahu.

“I’m more of a country girl,” she laughed. “Honolulu doesn’t need one more doctor. Our med school preaches medical shortage on outer islands but there’s not a lot of support out here. I’ve always been passionate about that.”

Instead, she took a position at Kauai’s Community Health Center, which she said she enjoyed.

But a move to Molokai combines her rural roots with her desire to make a difference.

“My family would always travel to Molokai for rodeos,” she said, describing her dad as a “full on cowboy.”

“My family grew up on Hawaiian Homes on Kauai. I grew up on a ranch with horses and cows, hunting every weekend.” She added that already being familiar with Queen’s on Oahu, having the support of Queen’s Health Systems at Molokai General Hospital made it a perfect fit.

She started practicing on Molokai at the end of April.

“A lot of patients are like, ‘Oh my gosh, thank you so much for being here,’ but then they ask, ‘Are you just a visiting doctor?’ Don’t worry, I’m not going to leave,” she laughed. “I plan on staying here… This is really where the need is,” Olds added, referencing Molokai’s largely Native Hawaiian population. “Maybe I’m making a difference.”