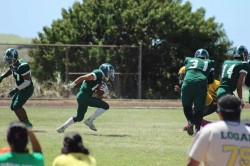 Overcoming turnover issues and a late injury to their starting quarterback, the Molokai Farmers managed a 42-21 win over the Hana Dragons on Saturday, Oct. 11, in Molokai’s final regular season game at home. With the win, the Farmers guaranteed themselves second place in the league and a spot in the Maui Interscholastic League (MIL) semifinals.

“We started off slow,” said head coach Mike Kahale. “…Definitely a bunch of miscues, a bunch of fumbles, but the kids put it together when they needed to.”

After a scoreless first quarter, the Farmers’ offense broke open. Receivers Kaimana Kahale and Willie Dela Cruz both hauled in touchdown passes from quarterback John Michael Mokiao-Duvauchelle. Seniors Sheyden Kaholoa`a and King Kahana-Kalua gave the Farmers’ ground game a bittersweet boost, rushing for a touchdown apiece on Molokai’s Senior Day. Kahana-Kalua, who normally plays safety, stepped in for Mokiao-Duvauchelle after the quarterback injured his elbow in the fourth quarter. As of Sunday his status for the next game remained uncertain.

Mike Kahale said the team was unable to view video footage of Hana in the week leading up to the game, so defensive coordinator Tanuli Ah Van went with the team’s base defense to battle the Dragons’ high-scoring offense, which ranks second in the league with a robust average of 40 points a game. The Farmers’ defense held Hana to half that average on Saturday and have now allowed a league-low 70 total points over four games, according to Maui News.

With the loss, Hana dropped to 2-2 and third place, while Molokai improved to 3-1 and held on to its second place seed, right behind undefeated Seabury Hall. The Farmers’ final regular season game is scheduled for Oct. 18 on the road against winless Kihei Charter.

Both Seabury and Molokai, who have faced each other in the past two MIL championship games, have earned a bye week and will not have to play during the first round of the MIL playoffs. After the bye week, Molokai may host a winner from the first round in a semifinal game on Oct. 30.

“We just gotta tighten up our game plan from the offensive side and make sure we’re executing,” said Mike Kahale. “It’ll be nice to have the extra week off so some of our guys can heal.” 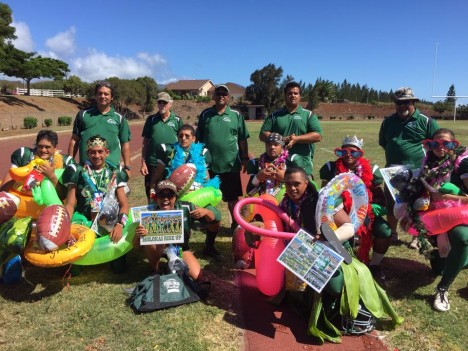