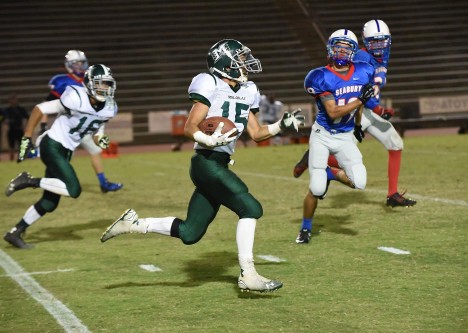 Running back Alden Abafo picks up a few of his 120 total yards. Photo by Matthew Thayer of The Maui News.

In the Maui Interscholastic League (MIL)’s inaugural eight-player football championship, the Farmers brought it all: pinpoint passing, a lethal running game, a hard-charging defense. In the end, however, the Spartans’ record stayed perfect, as Seabury beat Molokai 44-34 to be crowned MIL champions last Thursday. The Farmers took second place.

The game was broadcast live on Maui’s ESPN radio channel, which Coach Kahale said was the first time that a Molokai football game was featured on the air.

The Farmers commanded the first half on both sides of the ball. Molokai fullback Sheyden Kaholoa`a scored the first touchdown of the game to put Molokai ahead 6-0.

“We changed some things up, tried to do some new things offensively,” Mike Kahale said. “We’re a run-heavy team, kind of old school.”

However, the Farmers’ quick lead was negated by several miscues, including fumbles that the Spartans recovered to set up their first touchdowns.

Down 20-12 just before halftime, the Farmers pieced together a quick, two-minute drive.  Abafo scampered in for a 7-yard touchdown, and Mokiao-Duvauchelle snuck in up the middle on the two-point conversion to tie the game 20-20 at the end of the first half.

“I was proud of the boys for how they stepped up,” said Mike Kahale of the Farmers’ critical score before the half. “Coming out [for the second half] we’re looking at zero-zero ‘cause we’re tied.” 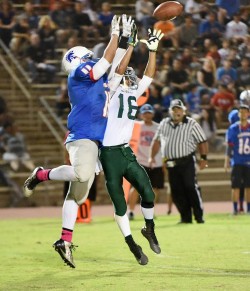 William Dela Cruz goes up for a pass against a Seabury defender. Photo by Matthew Thayer of The Maui News.

In the second half, Mokiao-Duvauchelle added a 13-yard touchdown pass to William Dela Cruz, but the Spartans took a 44-26 lead. Meanwhile, injuries and cramps became a recurring problem for the Farmers. Fullback Ena Victorino had already left with an ankle injury in the first quarter. Abafo and Kaholoa`a were among the multiple players who missed portions of the game due to cramps.

Molokai refused to give up and gave its fans one final spark in the closing minute. Mokiao-Duvauchelle threw a 30-yard touchdown to Keoni Makekau with under thirty seconds to go in the game. The Farmers tossed in a little bit of trickery on the two-point conversion, as Makekau lined up to kick but instead took the snap and passed to Abafo to make it 44-34.

“The boys battled,” Mike Kahale said. “… They fought to the very last play.”

Both teams rolled up over 400 yards of offense. Molokai gained five more first downs than Seabury, but the Farmers also had four fumbles and lost two, while the Spartans had no turnovers.

The Spartans finished 6-0 for the third straight season. In the three years that the MIL has had eight-player football, the Spartans have yet to lose. Molokai finished 4-2, with both losses to Seabury.

In the first two seasons of eight-player football, Mike Kahale explained, the team with the best regular season record was named MIL champion. This season, however, the league expanded and added playoffs and a championship game. With the MIL and the Big Island Interscholastic Federation (BIIF) now competing in eight-man football, Hawaii only needs one more island to participate in order to establish a state championship.

In the meantime, Molokai and Seabury continue to build a competitive rivalry as the MIL’s two best teams. But with Seabury losing 16 seniors, including Stinger, Mike Kahale likes the Farmers’ chances next season.

“We’ll be in really good shape [next year],” he said. “We have a really good junior class. A lot of them have been starters since their freshman year. This is gonna be their opportunity to step up.” 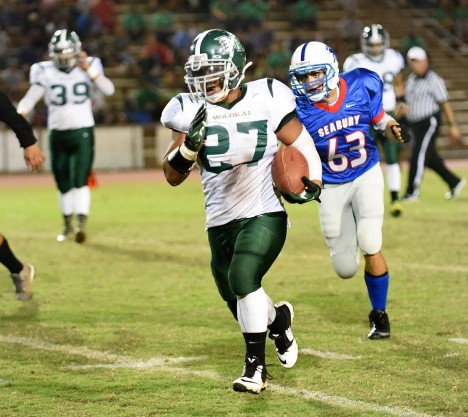