Molokai experienced flooding last night and this morning, and a flash flood advisory remains in effect this afternoon. Puko`o firefighters responded to a flooded east end home in the middle of the night last night, when a couple awoke to knee-high water in their house, according to Fire Services Chief Lee Mainaga. The fire crew assisted the couple in securing their possessions. Other nearby properties are also flooded, but those homes are built off the ground. 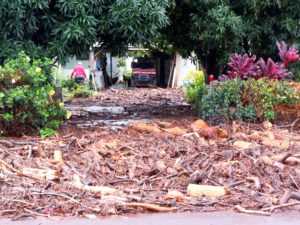 Road crews in Kawela worked through the night to clear mud and debris from the highway after the Kawela Stream overflowed. Water, mud and debris covered yards and blocked driveways within a one mile radius of the stream. Sections of Kamehameha V Highway were impassable during the night. 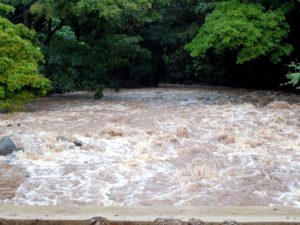 Residents are advised to stay away from streams, drainage ditches and low lying areas in case of flash flooding. Maui County Civil Defense also instructs drivers not to cross fast flowing or rising water that may be across the road.

The Ho`olehua Airport remains open as of noon today, though some flights have been reportedly canceled.