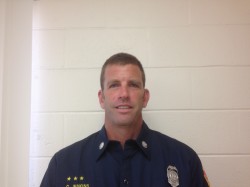 Greg Jenkins joined the Maui Fire Department on April 1, 1996 and was promoted to the rank of Captain this month on Sept. 16. After recruit class in 1996, Captain Jenkins was first assigned as a Firefighter to Molokai at the Ho`olehua Fire Station on Engine 9, B Watch. At various ranks throughout his career, Captain Jenkins has also worked at the Kaunakakai and Puko`o Fire Stations on Molokai, as well as on Maui, at the Napili Fire Station and in the Hazardous Materials/Training Bureau.

Other recent promotions in the Maui Fire Department include Captain Rylan Yatsushiro, has served more than 12 years and is stationed in Wailea. Peter Gand, promoted to the rank of Firefighter III, joined in 2005 and serves in Lahaina.