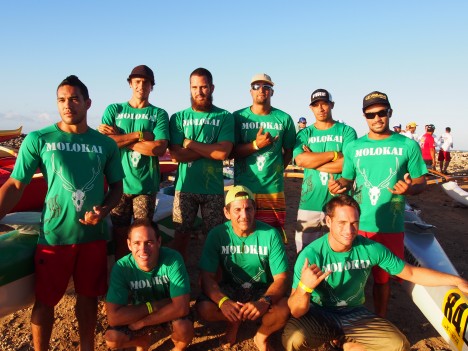 “My goal is to be in the top ten 10 of the local finishers and top 20 overall,” said Dudoit, a Molokai Hoe veteran who has been competing in paddling’s premier event for 24 years now.

Wa`akapaemua, the host island’s only team in the race, check-marked both goals on Sunday. The crew finished in 14th place overall with five hours, 37 minutes and three seconds. Among the local teams, Molokai finished ninth.

Molokai, meanwhile, celebrated yet another accomplishment: besting the 16th place and six-hour, two-minute time of their 2012 Molokai Hoe appearance.

“You don’t come across too many teams who don’t care if it’s flat or windy [conditions], but we’re confident in how we trained,” said Dudoit. “We’ve been practicing five or six days a week for the last three months. Short practices to keep peace with the family—but paddling nonstop.”

Molokai’s “nonstop” paddlers included John Russell Phifer, Kawai Spencer, Kamoana Spencer, Chad Lima, Titus Castor, Troy Heen, alternate Brandon Kansana and first-time Molokai Hoe paddlers Lohiao Paoa and Kamakou Mariano. Dudoit said he instructed the new paddlers to gauge their progress by their watches and not by the sight of Oahu in the distance, as the island can seem deceptively close while out in the channel. 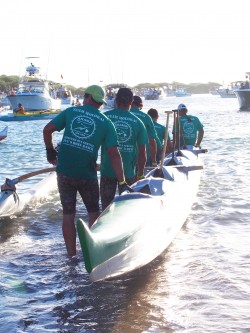 Gathered around their canoe among hundreds of paddlers at dawn, Paoa said the best advice he got was not to get too excited.

This year, the hype attracted 102 teams from locations as far as Hong Kong, Japan, Canada, France, Australia and Aotearoa, as well as Hawaii and both coasts of the continental U.S. Some paddlers even crossed their country’s borders to put together a crew. Tri-Nations Team (6:57:37; 84th place) was made up of paddlers from Australia, Canada and the U.S. Johnny Stewart, Tri-Nations’ steersman and six-year Molokai Hoe competitor, explained that the paddlers practiced in their home countries and met up for one day of training on Oahu before coming to Molokai for the race. Aside from cultural diversity, this year’s Molokai Hoe also featured a wide range of ages: five teams in the junior division (paddlers 16-18 years of age) and two crews in the Masters 65+ age group.

The Molokai Hoe began in 1952 when three ambitious outriggers journeyed from Molokai to Oahu in eight hours and 55 minutes. Shell Va`a now holds the overall record time with a finish nearly half that of the 1952 canoes: four hours, 30 minutes and 54 seconds in 2011.

Full results can be found online at molokaihoe.com/2014-results.