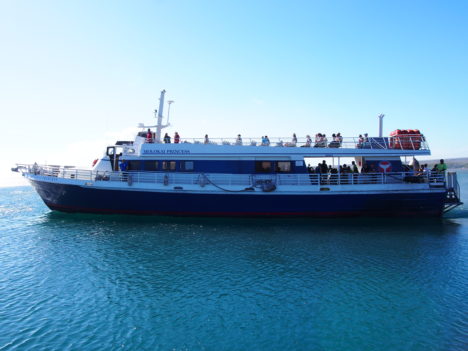 After three decades of service, the Molokai Princess ferry running between Kaunakakai and Lahaina will sail its final trip this week. Last week, the Public Utilities Commission (PUC) approved the request of the ferry operator, Sea Link of Hawaii, to cease service, noting falling ridership and financial losses.

The ferry’s last trip will be on Thursday, Oct. 27. The ferry service began in 1986 when Gov. John Waihee encouraged the company to run a ferry out of Molokai. At that time, it received a $30,000 monthly state subsidy, allowing the company to provide discounted tickets to daily commuters.

Sea Link is a subsidiary of Lahaina Cruise Company, and Jung said the Molokai Princess’ current crew of 10 will be assimilated by the company in other capacities.

However, he pointed out that because of the tourists that would come on the ferry for day-long van tours of the island, the ripple effect will be noticed.

“Van drivers, people serving lunch, gas bought to drive vans, crucial money into the economy… that’s all gonna be lost,” said Jung. “The economic impact is going to be much greater than the 10 employees.”

Sea Link reported dropping numbers for both tourists and locals. In January of this year, Sea Link reported tour passengers at 848 and non-tour passengers at 843. In July, those numbers had fallen to 524 and 335, respectively. That shows a 50 percent decrease in just seven months. When reviewing their closure request, the Department of Commerce and Consumer Affairs (DCCA) analyzed those numbers, they noted a similar 50 percent decrease in the first half of 2015.

Within the public comment period, 21 comments were submitted to the PUC, 19 of which supported the ferry’s continued service. Many mention the school’s need for the ferry in transporting sports teams to Maui.

Molokai High School Athletic Director Lee DeRouin said the biggest team that will be affected is the football team because of the large number of players and families, as well as equipment, that must be transported. But he said he has received confirmation that Lahaina Cruise Company may still work with them on a charter basis to get the team to Maui. Alternatively, he said they can try to schedule with the airlines.

“Bottom line is we’re losing a resource,” he said. “My concern if there’s a serious situation where airlines aren’t able to come, that was a resource to the community.”

The biggest impact for athletics, however, may be on Maui teams coming to Molokai for competition, according to DeRouin.

“We’ll be able to get the football there on one of the airlines, but we’ll just have to get creative [with scheduling and funding],” he said. “Can other teams do it? We hope so.”

Others who submitted public comment bemoaned the loss to the community if the ferry stopped running.

“Molokai ferry is a part of Molokai,” wrote resident Cindy Spector, who said she had been riding the ferry since the service began and used it as a commuter for 10 years. “It would be awful to only have airlines to get to Maui. It just seems wrong to take away our connection to Maui.”

Those involved in tourism also voiced their concern. Susan McGovern, the Road Scholar coordinator for the Lyman Museum in Hilo, said she regularly used the ferry to transport kupuna for educational visits to Molokai as part of the Road Scholar program.

“Our participants come from the mainland and sometimes other countries,” she wrote in her testimony. “The ferry ride has always been included as part of the itinerary, and we really appreciate having the opportunity to ride the ferry.”

The DCCA notes that although Sea Link tried to pursue federal, state and county funding for continued operations, those attempts were unsuccessful. Maui County gave the ferry a one-time grant of $105,000 last year to assist in continuing operations through October, 2015 but when Jung offered to transfer ownership of the ferry to the county, the Mayor declined the proposal, as reported by the DCCA.

“As the Molokai Council Member on the Maui County Council I would like to stress the critical importance that this ferry service provides to the residents of Molokai, especially our youth and off-island workers,” wrote Stacy Helm Crivello in her public comment supporting the ferry. “Obviously the Ferry can’t bear the burden alone and I think it’s time that Maui County and the State sit down and figure out how to remedy the situation because it is the people of Molokai, especially our youth that will bear the brunt of it.”

Jung said moving forward, he believes Molokai needs to make its opinion heard if it wants a ferry service.

“We need Molokai to come together with one strong voice to lobby for the county and state to take over the ferry,” he said. “If we could get a single strong voice from Molokai, Molokai could get whatever it wants.”

Sea Link will be offering refunds on unused paper and electronic ferry tickets until Dec. 16 of this year. Refund forms are available on their website, molokaiferry.com, and at Sea Link’s main office by mail by phone at (808) 661-3392, by email to info@molokaiferry.com, or by postal mail, 1036 Limahana Place, 3E, Lahaina, HI 96761.