Molokai residents put in their two cents for who they felt should become the new Honorary Mayor of Kaunakakai last Saturday, and elected Glenn Davis. Community members voted for kupuna nominees by placing pennies in the bucket of their favorite kupuna at a festival called Ho`olokahi e Mahalo Molokai, organized to celebrate the aloha spirit and service of individuals and nonprofits. 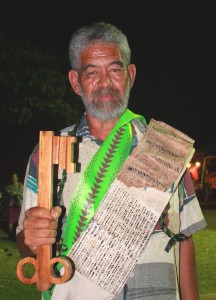 “It’s a great privilege, and I’ll continue to be a nice and helpful guy,” said Davis. He is known on Molokai for helping elderly residents with their groceries, volunteering to pump gas at Hayaku Gas N Go for tourists and locals alike and delivering Molokai Dispatch newspapers around town every week. Davis, who works with the Molokai Occupational Center crew, was also responsible for establishing the first alternative educational facility at Keawanui many years ago.

Davis was honored after his election with the presentation of a symbolic, large wooden key to Kaunakakai and a kapa sash, handmade by Mililani Hanapi. He estimates he collected more than $150 in pennies that evening, adding he plans to donate those funds to the Kilohana afterschool program for student meals, and to the Molokai Humane Society.

“It’s kinda neat being appreciated,” said Davis. “I was amazed at all the support.”

The eight kupuna nominees for the title were all honored with custom-designed sashes created by Lyndon Dela Cruz.

“I want to thank all the kupuna who participated… and I can’t think of anyone more deserving than Uncle Glenn,” said Teri Waros, one of the festival’s organizers. She said she hopes Ho`olokahi e Mahalo Molokai will become an annual event.

“This island is rich in culture, rich in aloha, and… it is the people of Molokai who are so welcoming,” said County Council Chair Danny Mateo.

Attendees of the event, held at Mitchell Pauole Center, donated funds to the nonprofit organizations of their choice, dozens of which were represented with educational booths and handouts.

The festival also featured a photo contest for kids that highlighted both Molokai’s aloha spirit and its kupuna. Winners of the Kindergarten to fourth grade division are Sage Yamashita and Kira Kai Yamazaki-Gray; fifth through eighth grade, Alex Mawae and Cameron Tancayo; and ninth through 12th grade, Kamakaleihiwa Purdy-Avelino and Warrene Mahoe. To view all the entries, go to the “Molokai Kids Photo Contest 2012” page on Facebook.