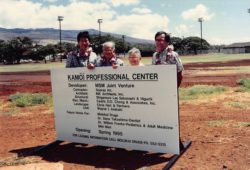 It began in 1935…. While working at Benson-Smith, a large Honolulu drug store, a young pharmacist is asked if he would move to Molokai to become the island’s first pharmacist and also work with two plantation doctors,” Mikami writes. “It was a huge decision. Richard Sakata was supporting his widowed mother, but she encouraged him to move and to start a new life. Arriving when it was pitch-black on a cattle barge at the Kaunakakai harbor, one light shone away from the wharf. Richard thought, ‘What have I done? Did I make the right decision? Where will I live?’

When he moved to Molokai, Richard Sakata lived with Harry and Rosebud Chung and their six children for five years. Richard’s pharmacy was part of the doctors’ office located where Dr. Aluli’s practice and Mrs. K’s food counter now stand. During the weekend, Richard would ride the cattle barge back to Oahu to spend two days getting his “big city fix.” He would go to boxing matches at the old Honolulu Civic Auditorium and spend time with his mom and sisters. Then, every Sunday, he would get back on the barge and return to Molokai.

The young single men would go up to the teachers’ cottage behind the Molokai High School and “scope out” the young single women. Maui-raised Betty, who was the high school’s first secretary, moved to Molokai in 1937 and lived with the teachers. After Richard and Betty met, they would go out to the beach, hike, and finally tied the knot in 1940. Betty also worked at the welfare office. After having their only child, Judy, Betty worked at Molokai Drugs while Judy attended school. Together, Richard and Betty worked at building Molokai Drugs, an old Army commissary, located at the now-Jeans Warehouse site, into a drugstore that was more like a general store. The store carried fertilizer, garden tools, appliances, and also processed millions of photos with Kodak. They had only employee, Emma Lau (mom of Anna Kearney and Pat Lau) for many years. They never took vacations, but in 1959, Richard hired a pharmacist from South Dakota for three months while he took Betty and Judy all over Asia.

Richard rarely left the island until 1969 when Judy and husband David, a new pharmacist graduated from the University of Kansas, moved to Molokai. Together, Richard and David worked to expand the business, renovating Molokai Drugs at least seven times. In 1981, at age 70, Richard retired, and David continued running the business. Jon and Lynn Mikami, David’s brother and sister-in-law, moved to Molokai in 1981 to work with David.

In 1995, Richard, David, and Jon built a new Molokai Drugs building, and thankfully, both Richard and Betty were still alive to participate in its grand opening in July 1995. Over the years, Molokai Drugs grew from one employee to a staff of 25 today. Molokai Drugs is in its third generation today with David and Judy’s daughters taking the helm: Kimberly as president and Kelly as pharmacy manager.

Molokai Drugs has come a long way. Prescriptions were filled using an old Royal typewriter to type labels for each prescription vial, bottle, or tube. Today, labels are all computer-generated. Insurance claims were all done by hand on triple carbon paper. Today, claims are generated with a push of a button and are completed in a blink of an eye. Technology has taken over where human hands once did everything, but, we have not lost that human touch in customer service. 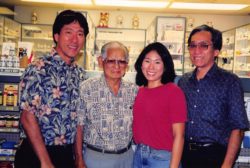 Mahalo for your support and patronage. It has been our honor to serve Molokai residents for the past 85 years!