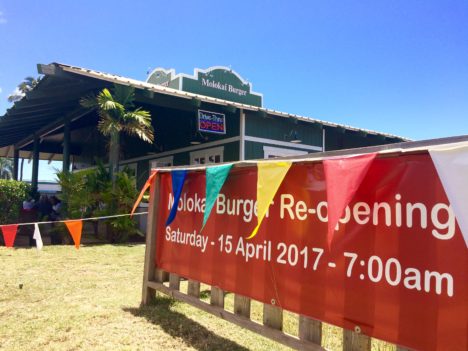 After a fire in February destroyed Molokai Burger’s kitchen and left the restaurant a sooty mess, the island’s only drive through has reopened two months later. Last Saturday, happy customers found the restaurant looking good as new, with equipment replaced and a clean, shiny interior. Owner Rod Felt said he is appreciative for the community’s backing through the ordeal.

“[We are] gratitude for the support, we really feel it,” said Felt. “We had so many come by and help us. There was one day during our cleanup we had 63 people [not including employees] helping us…. this has all been a feel-good experience for us.”

On Feb. 13 at 11:19 p.m., smoke was reported coming from the restaurant while the building was vacant. Three minutes later, firefighters arrived at the scene and found heavy smoke and active flames in the back kitchen area of the restaurant, according to the Fire Department. The fire was under control within 10 minutes and fully extinguished around 1 a.m. No one was injured. Felt said employees had left the restaurant at 10 p.m. that night.

Investigators found the fire had started in a closet space under the stairs. A cell phone had been left plugged in, sitting on tightly packed stack of rags, Felt said.

“I believe it burned down into the rags and smouldered,” said Felt, based on what investigators had told him. “The thing that I learned is if you’re going to charge your phone, leave it on something that isn’t going to burn… like a kitchen counter.”

After the fire, Felt predicted his business would be ready to reopen in two months, and they stuck to that timeline. He said his background in construction made him familiar with completing jobs on a schedule.

Though Felt did not want to put a price on the cost to reopen, he said their insurance coverage capped out at $460,000 and they spent more than that on the repairs, along with expediting materials to reopen as quickly as possible. Felt said it is still unclear how much of the expenses their insurance will be reimbursing.

In addition to damages to the equipment and building, thousands of pounds of smoke-damaged food had to be thrown out after the fire, Felt said in a February interview.

Felt confirmed all of the business’ 20 employees continued to be paid their regular salaries during the closure.

“I’m very happy they’re open again,” said resident Joan Wisinski. “I missed them while they were gone. It’s comfortable and prices are fair.”

“I’m definitely glad it’s open,” she said. “I thought it would be longer [to reopen] but when I seen [the sign] I was happy.”

Even visitors to Molokai said the restaurant is a favorite stop for their family.

“Everybody loves it, there’s something for everyone [on the menu],” said Heather Williams of Honolulu.

“My husband just got off the plane and that’s the first thing he wanted!” another visitor said of Molokai Burger.

Molokai Burger opened at Mile Marker 0 in Kaunakakai in 2009, owned by Felt and his wife Kerrie. Their menu features a selection of burgers, fried chicken, fries, milkshakes and other fast food specials.