Molokai Burger’s grills will remain cold for two months, following a fire during the night of Monday, Feb. 13. The blaze and smoke caused significant damage to the building’s interior and equipment, and the island’s only drive-through is closed while repairs are made.

Smoke was reported by a community member at 11:19 p.m., while the building was vacant. Three minutes later, firefighters were at the scene and found heavy smoke and active flames in the back kitchen area of the restaurant, according to the Fire Department. The fire was under control within 10 minutes and was fully extinguished around 1 a.m. No one was injured.

Owner Rod Felt said employees had left the restaurant at 10 p.m. that night.

“We [later] watched the surveillance video… [of] them cleaning up and double checking everything… things were all turned off and put away,” he said. “Then… smoke started billowing, gently at first, from an area where we keep our cleaning equipment.”

Felt said they could see a flash of light before the cameras went out. 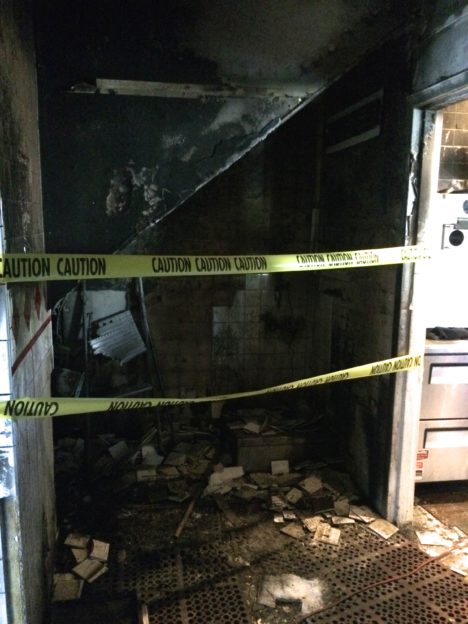 The Molokai Burger closet where the fire is believed to have started. Photo by Catherine Cluett Pactol

The fire likely originated in a closet space under the stairs. Felt said the fire department’s initial investigation suggested the fire started from a personal electronic device that was left plugged in — an area Felt said employees frequently charge their cell phones. He said their insurance company’s forensic team came at the end of last week to conduct a more thorough investigation. Fire officials say the fire appears to have been accidental, with no indicators it was intentionally set.

Though the building appears normal from the outside, the inside is blackened and heavily damaged. 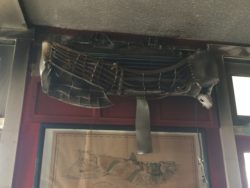 One of the dining room AC units melted by the heat. Photo by Catherine Cluett Pactol

Heat near the ceiling reached 900 degrees, Felt said the fire department told him. The intense temperatures left behind an interior scene that could be from a sci-fi movie. Air conditioning units are melted; the plastic around display TVs dripped off in a hanging, tangled mess of electronic rubble; the exit sign above the front door is an unrecognizable blob of plastic dangling from the ceiling. The formerly spotless white tile of the dining area is coated in black, greasy smoke stains. The glass of light bulbs in the kitchen area melted into long icicles.

Felt said structurally, the fireproof surfaces of the walls and ceilings held strong, with no wood burned. 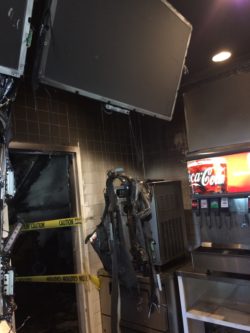 Display TV with melted plastic and electronics hanging from it. Photo by Catherine Cluett Pactol

The Fire Department estimated damage to the building at $150,000, though damages to the equipment will bring the total up significantly, Felt said. In addition, thousands of pounds of food had to be thrown out after irreparable smoke damage.

Molokai Burger opened at Mile Marker 0 in Kaunakakai in 2009, owned by Felt and his wife Kerrie. Their menu features a selection of burgers, fried chicken, fries, milkshakes and other fast food specials.

Felt said they have about 20 employees, all of whom will continue to be paid during the estimated two-month closure.

“We’ve got so many employees out of work, and we want to keep them busy,” he said, adding they will assist with the cleanup efforts. “We will pay every one of them through this whole process.”

Felt said the community has been extremely supportive through the fire ordeal, with many calls and offers of help.

One of those “good neighbors” was the person who first reported the smoke that night.

“We believe that we are being watched over,” Felt explained. “A man that we know very well was coming up from the dock late at night and decided to pull over and have a nap… he pulled in by our property and went to sleep. He said, ‘I was suddenly awakened and looked up and saw smoke coming from your building.’ So he got on his phone and called 911 and they responded immediately.”

Felt had words of praise for both the Fire Department and their insurance company, State Farm, who he said has been “wonderful.”

Replacement equipment has already been ordered and Felt said he is hopeful the burger joint will be open again soon.

“We feel blessed,” he said. “The result was not as catastrophic as it could have been.”