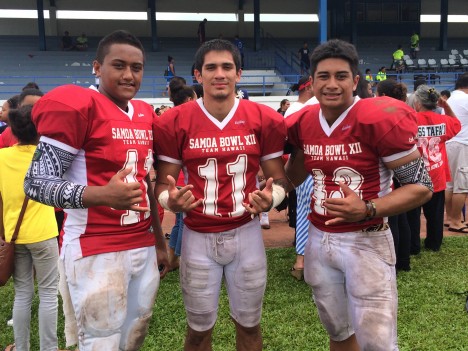 Thanks to his athletic talents, his heritage and more than 170 chicken katsu plates, local boy Ha`aloha Tanielu Aikala-Falealii became the first Farmer to represent Molokai football in American Samoa. Aikala-Falealii, a senior at Molokai High School, was selected to play for Team Hawaii in the Samoa Bowl, an annual game that pits Hawaii’s best Samoan football players against American Samoa’s all-stars. In the Samoa Bowl XII on Dec. 27, Team American Samoa won, 12-6.

Part Hawaiian and part Samoan, Aikala-Falealii was able to honor both of his cultures in the Bowl, said his father, Sepulona Aikala-Falealii. Sepulona, a police officer, grew up in American Samoa, a U.S. territory with about 55,000 people and said most of his family still lives there. They attended the Samoa Bowl to cheer Ha`aloha on.

“It’s pretty exciting, especially [going] for Christmas, because I can spend it with my grandpa,” said Ha`aloha before the game. He said the last time he’d been to American Samoa was around middle school.

Samoa Bowl organizers first notified the family that Ha`aloha had been selected in the middle of November. The Aikala-Falealii and Kawano families organized a fundraiser on Dec. 3, cooking and delivering chicken katsu plate lunches all over town. They hoped to sell 130 to cover nearly $1,300 in travel, uniform and meal fees. By the end of the day they’d sold more than 170.

“One fundraiser took care of everything and he had extra money after,” said Ha`aloha’s mother, Kapua Aikala-Falealii. “… It was a blessing.”

This season, Ha`aloha played defensive lineman and fullback for the Farmers’ eight-player football squad, which finished second in the MIL. Kahale said Ha`aloha has matured as a player over the past couple of years. In this season’s championship game against Seabury, multiple players suffered injuries and cramps. Ha`aloha stepped in and had five carries for 32 yards, averaging a hefty six yards a carry.

“He doesn’t attract or seek any attention,” said Kahale. “He’s just kind of a kid that just does what you expect him to do [with] no complaints and always works hard.”

Ha`aloha, 17, comes from a family full of athletes with honors to their names. His oldest brother Ha`aheo, 22, was also selected for the Samoa Bowl in 2009 while playing football for King Kekaulike High School, but was wait-listed and didn’t play. Second oldest brother Hau`oli, 19, was named an MIL All-Star in both volleyball and basketball as a Farmer. Younger sister and MHS junior Hepuakea, 16, was voted The Maui News MIL Player of the Year for Division II girls’ basketball. Haiola, the youngest, is only 10, but Ha`aloha said she already hopes to play volleyball and softball.

“It makes me push more,” said Ha`aloha of growing up in a house of athletic talent.

According to Jim Higgins, one of six coaches to lead Team Hawaii, the first Samoa Bowl was played in 2003 at the suggestion of “sports-minded” former American Samoa Governor Togiola Tulafono, who hoped to give Samoan players in Hawaii a chance to reconnect with their roots. Selected players must be high school seniors of Samoan heritage.

“We really go there to bring the kids home and let them stand on the soil that their ancestors farmed,” said Higgins, who coaches football at Oahu’s Campbell High School. “Because they’re all seniors at the time, it’s real pivotal time for them. … This trip kinda gives them a sense of identity, who they are, who they come from.” 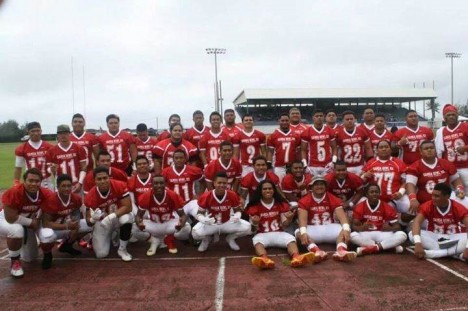 The teams share meals together, visit with the governor, and participate in workshops on culture and language. The Samoa Bowl has expanded to include competitions in volleyball, often including Samoan players from the mainland as well. Ha`aloha said getting to know so many different players from across the state was what he most enjoyed.

“Our kids would never have had an opportunity to participate in these things if football was not available to them here on Molokai,” said Kahale. “That’s why we do what we do as coaches … because our kids deserve these opportunities.”