Three young boxers from Hawaii, including Hunter-Gabriel Manaba of Molokai, made the cross-country journey to the first-ever USA Boxing Junior World Team Open held in Reno, Nevada January 7 to 11. The event showcased many of the nation’s top 15 and16 year old boxers vying for the opportunity to represent the U.S. at the 2013 AIBA Junior Men’s World Championships. 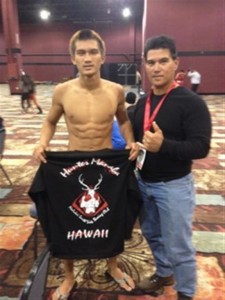 Tournament action began with preliminary rounds on Monday, Jan. 7 and Tuesday, Jan. 8 at the Grand Sierra Resort & Spa with each session beginning at 6 p.m. nightly. Kauai native Kristopher Alcos did not advance to the quarterfinals which took place on Wednesday, Jan. 9. Two remaining Hawaii natives showed the strength of their islands, winning semi-final bouts on Thursday. In the lightweight division, Keoni Adric, Jr. of Haleiwa, won a 23-13 victory and in the light welter weight class, while Manaba took a 12-9 decision over Ruben Torres of Whittier, CA. Both athletes moved on to a championship night showdown on Jan. 11, where Adric was able to take home a medal with a 35-26 win over Jose Guevara of Phoenix, AZ. In the light welter weight class, Brandon Trejo of Napa, CA took the crown winning, a 14-11 decision over Manaba.

Silver medalist Manaba still has the opportunity to train for six weeks at the Olympic Center located in Colorado Springs, CO as an alternate in case Trejo is not able to compete. He will attend training this summer prior to the 2013 AIBA Junior Men’s World Championships, which will be held in Kiev, Ukraine in August.

Hunter wishes to express his gratitude to Coach Tomasito Manangan, his traveling coach Mark Ozaki and most importantly his father, Dedric Manaba for his support, encouragement and dedication to the sport of boxing.