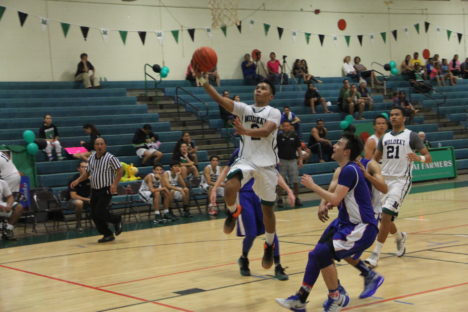 The Molokai Farmers Boys and Girls Basketball teams hosted the Seabury Hall Trojans last weekend at home at The Barn in a series of hard-fought games.

The Lady Farmers hosted Seabury at The Barn, and Friday was Senior Night for Molokai’s four seniors, Brooke Keliihoomalu, Precious Rawlins, Nadia Augustiro and Catherine Merkel. The Lady Trojans got the win in a hard fought close game 45-41 to improve to 6-1 on the season. Molokai (0-5) was led by junior Sydney Rawlins with 11 points and senior Keliihoomalu added 10. Augustiro had 8 points and junior Camille Ledesma finished with 6 points.

“The team would like to thank the community and parents for coming out and supporting our seniors, they are a very special group of seniors on and off the court, excelling in the classroom and playing with Farmer Pride,” said Molokai Coach Lee Derouin.

“Just getting the chance to see the Molokai community support their team and their four seniors was really a beautiful thing,” he said.

It was another Barn Burner in the second game on Saturday as the Lady Farmers (1-5) held off the Lady Spartans (6-2) to get their first win of the season 24-22. Molokai led the entire game and held off a Lady Spartan rally in the fourth quarter.

DeRouin was happy with his team’s play.

“The coaching staff is really proud of the Lady Farmers this week as they really worked hard in practice each day and on the court preparing for senior night versus Seabury,” he said. “We know we have many things still to work on but defensively and intensity wise they are a real determined group of basketball players.”

Molokai travels to Lanai next weekend for the final two regular season games and will come home to face the Pine Lasses again in the first round of the MIL DII Girls Basketball Tournament held at The Barn starting Thursday, Jan. 26 at 7 p.m. The winner will play Seabury, who has already clinched the regular season championship, on Jan. 27 in the championship game.

On Friday night, the Trojans defeated the Farmers 65-45 to remain unbeaten in MIL DII play and won their 50th game in their last 51 games.

The Farmers were led by senior Edel Mark Alvarez with 18 points; seniors Michael Sterner added 8 and Aaron Rapanot had 7.

On Saturday, the Spartans completed the weekend sweep of the Farmers winning 46-23 to remain unbeaten at 6-0. The Farmers fell to a season record of 3-3. Molokai was led by Alvarez with 10 points, while Rapanot added 6 and Sterner had 5.

Seabury Head Coach Scott Prather said it is tough to win at The Barn.

“We had another tough game versus a very aggressive and physical team,” he said. “You always have to bring your A game to get a win over here so we feel very fortunate to have won both games.”

“After being handled so soundly at both ends of the floor, it can be hard to try and find anything positive but the realization that this is the level of MIL Boys Varsity Basketball and to be competitive we must do so as a team,” he said. “As a coach that is really all I’m trying to find — how to get our boys to see the possibilities of succeeding as a team.”

Danner said the Spartans have been so successful because “they understand not only their individual roles on a team but how to take away important roles from their opponents….”

Molokai will travel to Lanai this weekend for two games against the Pine Lads.