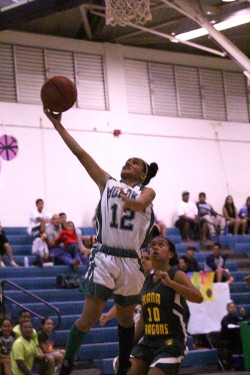 Seven Molokai basketball players were named by The Maui News as some of the top players in the Maui Interscholastic League Division II. The honorary list is compiled by the newspaper every year, after selections are made by MIL coaches. This year, Molokai High sophomore guard Hepuakea Falealii was picked as The Maui News MIL Player of the Year for her division.

Among the four others joining her on the girls all-star first team is Molokai senior forward Ilana Meyer.

On the all-star second team is senior Tiara English and junior Lehiwa Pedro, and their Molokai teammate Taylor Keliihoomalu was given honorable mention.

The Lady Farmers’ basketball coach, Lee DeRouin, was also named D-II Coach of the Year after leading the team to the state semifinals this year.

“I’m happy that the girls get recognized for all their hard work and commitment to the team this year,” said DeRouin. “It makes my job easy… they’re very dedicated — a great bunch of kids to be around.”

He turned all the credit back to the girls for his own award.

“It’s great that the other coaches recognized me, but it’s a reflection of the kids’ hard work,” he said.

The Maui News all-star teams are selected by MIL coaches, according to the newspaper.

DeRouin is looking forward to another successful season next year, with Falealii returning to the team to build on their progress this year.

“Hepua does a great job of controlling the tempo of the game,” he said of why she was chosen as the league’s best. “Both defensively and offensively, she’s a tough match-up for the other teams.”