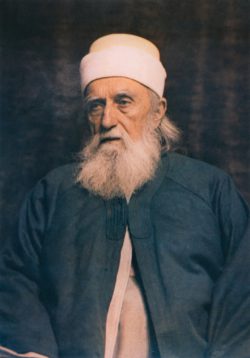 The Molokai Baha’í community will join members of the Baha’í Faith throughout Hawaii and around the world on Nov. 28 to commemorate the 100th anniversary of the passing of ‘Abdu’l-Baha on that date in 1921.

Throughout the East and the West, ‘Abdu’l-Baha acquired the reputation of an ambassador of peace and a champion of justice. He became the head of the Baha’i Faith following the passing of its Prophet-Founder, his father, Baha’u’llah, in 1892.

From 1910-1913, despite ill health, ‘Abdu’l-Baha travelled to Egypt, North America and Europe, where he proclaimed the essential principles of the Baha’í Faith, such as the equality of women and men, universal peace, removal of all forms of prejudice, the harmony of science and religion, and a spiritual solution to economic problems.

Addressing the great and the humble, and all who crossed his path, he affirmed that “love is the greatest law,” that it is the foundation of “true civilization,” and that “what humanity urgently needs is cooperation and reciprocity” among all its people.

The Baha’i Faith began in 1844 in Persia, now modern day Iran. The Prophet-Founder Baha’u’llah was banished and imprisoned for over 40 years for teaching principles to establish peace and the unity of mankind.

These teachings were brought to Hawaii in 1901 by Agnes Baldwin Alexander, a daughter of early missionaries, who learned of the Faith on a trip to Europe. Alexander was the first person born in Hawaii to embrace the Baha’i Faith and Mary Kealiikahumoku Tilton Fantom was the first indigenous Hawaiian to become a Baha’í and to serve in its administration. The Baha’í message was also presented to Queen Liliʻuokalani in 1915, who was interested in its message of peace. There has been a Baha’i community on Molokai since the 1950s.

Baha’ís and their friends will hold special commemorative events throughout the Hawaiian Islands to mark the occasion, including screenings of a film created for this occasion. For information about events on Molokai, email molokaibahai@gmail.com or call 808-213-5511.  For more information about the Baha’i Faith or ‘Abdu’l-Baha, go to bahai.org.