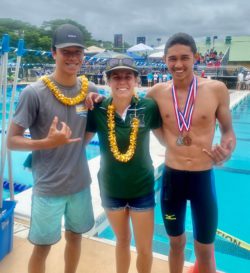 It was a history-making weekend in the pool for Molokai swimmers at the state meet on Hawaii Island. Senior Kama Ward became the highest-achieving swimmer ever at Molokai High, earning a silver and bronze medal on the podium. He and Mauli Pupuhi represented the Farmers at the state level, marking the first state finals qualifications for a Molokai swimmer in more than 20 years, according to Coach Amanda Labriola.

Going into the preliminaries on Friday, Ward was seeded first and came out first in the 50 yard freestyle. For his 100 yard free event, he was seeded fifth. He swam his fastest time this season, and went into Saturday’s finals seeded first.

“Both boys had outstanding swims today,” said Labriola on Friday. “Mauli went into the 50 freestyle prelims seeded 16th and came out seeded eighth, where he tied another swimmer from Kealakehe High School. He had to do a swim off for eighth place where he was touched out. Mauli’s 100 free and 50 free he swam personal best times, and I could not be prouder as he shows constant growth.”

“This past weekend we got to witness history be made for the Molokai high school swim team,” said Labriola. “Both boys had remarkable swims. It has been over 20 years since a Molokai swimmer has qualified for state finals which is a testament to these boys’ hard work and discipline throughout this season. Kama is the highest achieving swimmer in Molokai history, and I am incredibly proud of him. Mauli showed incredible grit and determination when it came to the tie break swim off and I am looking forward to another season of coaching him. Both boys showed outstanding sportsmanship both inside and outside of the pool with their competitors and represented Molokai well.”

Only one Molokai male swimmer has ever made it to a state final race – Lenn Yonemura was eighth in the 500 free in 1998.

“We would like to thank the athletic department, friends of Molokai, and the Molokai community for all their continuous support throughout this season,” added Labriola. “This season would not have run so smoothly if it weren’t for the enormous amount of support we received from our swim parents. Your dedication to your student athletes did not go unnoticed.” 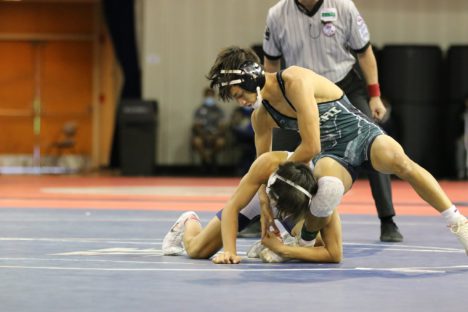 Molokai wrestlers also came home with medals from their state tournament. Austin Kaalekahi was named second in the state in the 106 pound division. Heno Kaiama earned fifth place at 195 pounds, and Leo Kalipi finished in sixth place at 220 pounds.

“After an exciting day of competition, we have four of the 11 still battling for a medal,” said Head Coach Randy Manley after Friday’s matches. “Austin Kaalekahi at 106 beat his first two opponents to move into the semifinals in the morning. Heno Kaiama at 195 won two out of three today to advance to tomorrow’s consolation quarter finals. Leo Kalipi won in overtime to move into the semifinals. And Barbara Simon at 112 won two out of three to advance to the consolation quarter finals tomorrow.”

With three medals on Saturday, Manley was grateful for another strong year.

“It was a good way to end our season,” he said. “We had a good group of fans who came to support us. Thanks to all who participated in our fundraising and supported our boys and girls in this restart season.”

Molokai had another connection to the podium at the state tournament. Moanalua Boys and Girls Wrestling teams won the state championship, coached by Molokai’s Lucas Misaki.