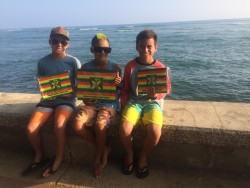 Alex Mawae recently competed at the regional event of the National Scholastic Surfing Association (NSSA) surfing competition in the Stand Up Paddle (SUP) Division at Kewalo’s, Oahu on March 16 and placed third in his division. This was an awesome experience for young Alex as he got a chance to see the incredible talent of the future Hawaii surfing generation. SUP has recently been added into the NSSA and slowly growing with the young competitors.

Twelve-year-old Alex’s strengths lie in long distance paddling when he first came on the Stand Up Paddling scene at 9 years competing in the Molokai Holokai and then onto the famous Maliko run on Maui’s north shore. He also paddled from Maui to Molokai with his Mom and two sisters when he was nine years old.  He competed in some of the Maliko races in both SUP and OC1 and paddled in an OC2 relay across the channel to Oahu when he was 10 years old. For 2015 he now has his eyes set on two Molokai Oahu Crossings and one Maui to Molokai crossing for 2015 to be done in relay as he builds his knowledge and understanding of the ocean.

The surfing side of SUP is certainly the fun side for Alex which he loves with a passion. Although the level of surfing is incredible on the other islands this does not daunt this young man as he is more determined to raise his surfing level up. The NSSA regionals was his perfect opportunity and excuse to SUP surf all week during Spring Break which has now qualified him for the Nationals to be held at Huntington Beach in June. Next up on Alex’s agenda is HSA State Championships at Ala Moana Bowls from April 23-26.