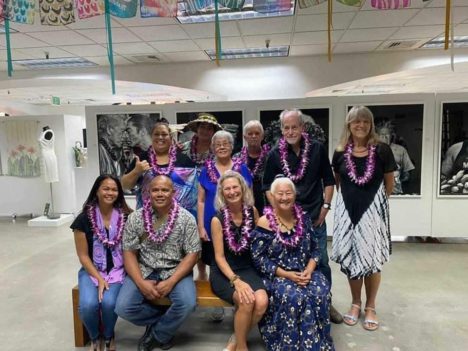 Highlighted against white gallery walls, pedestals and glass cases, Molokai art is taking Oahu by storm in the largest ever group exhibition of Molokai artists in Honolulu, at the Downtown Art Center. The historic show, called No Stop Light: Molokai, opened last Friday and will remain on exhibit until Saturday, May 28.

Twelve Molokai artists are represented, using mediums varying from bone to cloth, clay and paint, photography and coconut leaves, beads and wood. A diverse group of kama’aina and newcomers to the island, the artists utilize contemporary, traditional and cultural styles to highlight their work and represent Molokai in a stunning gallery display.

Upon entering, attendees are greeted by Molokai faces in the exquisitely exposed, larger-than-life, black and white portraits by internationally recognized photojournalist PF Bentley. And while the art takes on a polished gallery professionalism, its Molokai roots remain strong. By the door, an ahu pohaku, or mound of stones, created from raku pottery “rocks” by ceramicist Kim Markham, pays homage to Molokai kupuna. On the other end of the gallery, kalo and ti leaf are “planted” in baskets of woven coconut leaves by ‘ulana niu (coconut weaving) artist U’i Kahue-Cabanting. The entire space is sprinkled with fresh, tropical flowers from the Pruets in Halawa.

“It’s unprecedented,” longtime Molokai potter Dan Bennet said of the show. “It’s a big deal for us, not only for the individual artists but for the Molokai Arts Center to be represented…. I hope it will give us more exposure. A lot of people will come to the show and see the artists of Molokai are as good as anywhere else.” 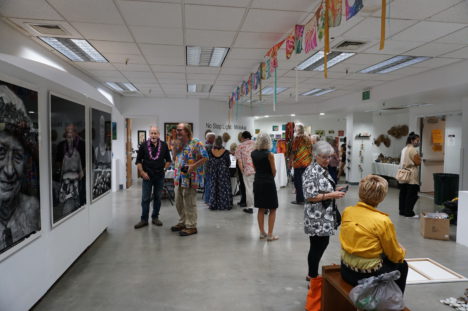 Former dental hygienist-turned-painter Fuernsteiner, creator of the iconic image of Kanaloa’s face underwater with mountains overhead, said she painted for weeks preparing new pieces for the show. She spoke of the challenge of shipping her paintings over for the event but said it was so rewarding to be met with such enthusiasm from the art community in Honolulu.

For Tangonan, owner of Kupu A’e wearable batik art business, preparing large-scale pieces for the exhibit was a family affair to “take the silk screen to another level.” Her colorful, cultural depictions run throughout the gallery, with scarves and pareo also available for sale during a pop-up Friday evening.

Sculptor Carol Rocha described the feeling of being at the show “surreal.” Many of her sculptures use human form, and some incorporate doe skulls in combination with clay. 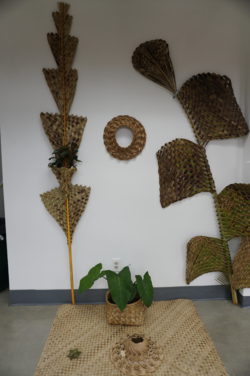 “Sitting back and watching people enjoy them is so fun to me,” she said.

Kyle “Ikaika” Bishaw-Juario, a Molokai police detective, carves wooden fishing lures. Seeing his work in the gallery brings appreciation for the artistic side of his functional pieces.

“It’s a different side of it… when a fisherman gets a lure, you put it to work and it’s gonna catch some fish. When you look at those [in the glass gallery case], you’re looking at the intricate detail, you see things you don’t normally get to see as a fisherman,” he said.

The exhibit and its inspiration were coordinated by Markham, who gathered Molokai artists together, promoted the show, and collected the funds for rental of the space, shipping and other costs, which were shared by the artists. The artists also unpacked and installed their own pieces prior to the opening.

“I am amazed at the level of care and dedication that everyone contributed because in the beginning there were a lot of doubts [from the artists] that we could do this,” she admitted.

“They financed it themselves, this is amazing,” she said. “Molokai artists got together, they pulled this off…. I’m so proud of them, Molokai people are awesome.”

Markham said the Downtown Art Center contacted her last year letting her know the gallery was Aravailable in May and suggesting a Molokai exhibit. With only about six months to pull off a full show, Markham and a core group of artists got to work, to be joined by others – with a lot to prove.

“Because we don’t live in the art world in Honolulu, we’re way off on Molokai, they’re not even aware of us,” she said. “This is the first time most people even know there is an art world on Molokai.” 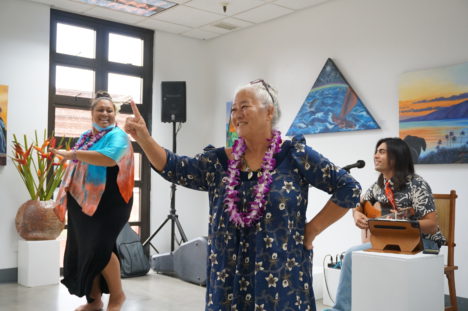 She said she hopes to inspire a “vibrant art scene” on Molokai, and the vision of the Molokai Arts Center having a facility to call its own.

“We are in the most cruddy, rotten, leaking building with no bathroom,” Markham, co-founder of the nonprofit, said of the organization’s current space. “Our dream is to get a rehab building or even better, a new building… so our legacy can continue.”

The show proved financially successful in just the first few hours of opening.

“So far we’ve done about $8,000 in sales today, which is more than we could ever hope to do on Molokai in months,” she said about halfway through the gallery’s reception event Friday.

The exhibition is open to the public Tuesday through Sunday, 11 a.m. to 6 p.m. until May 28 at the Downtown Art Center, located at 1041 Nuʻuanu Ave., second floor, in Honolulu’s historic Chinatown Gateway Plaza.