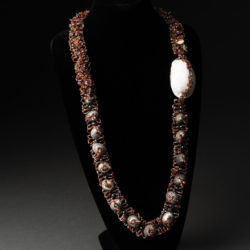 Twelve Molokai artists entered a total of 48 entries into the Hawaii Craftsmen 2021 Annual State Exhibition. Of the 48 entries, nine works were accepted. This year, the competition was very stiff as there were a total of 551 entries statewide, submitted by 195 artists, and of the 551 entries, only 20 percent of the works, or 122 pieces, could be juried in.

The Molokai Artists whose works were juried in are: Kim Markham (three pieces were accepted), Patti Golebieski (one), Carol Rocha (one), Dan Bennett (two), Arabella Ark (one), and Terry Klerlein who collaborated with Kim Markham (one).

There was over $10,000 in awards given out this year. The list of awards, recipients, award amounts and sponsors of the awards can be found at hawaiicraftsmen.org under “Programs.” The juror presentation can also be found at this page as a recorded Zoom event where juror Angelik Vizcarrondo-Laboy discusses her background as a Los Angeles and New York-based curator, writer and arts administrator of contemporary art and craft. Her presentation is followed by questions from the audience.

A hearty congratulations goes out to all the Molokai artists whose works were juried into this exhibit. Patti Golebieski also won the Manoa Gallery Award of $250 sponsored by Cathy Cooke for her entry called, “Courage.”

The inspiration for Patti’s piece came as a result of retrieving the cowry shell underwater on a rock wall.

“2020 was a year requiring courage from many people,” she said. “The cowrie ghost, and the opihi shells represent the families who had to reach unknown depths to find courage through the dark times. I made this piece to encourage others to find their courage.”

Thank you to all of the Molokai Artists who submitted their work in this statewide competition. It was a very impressive turnout as were the works!

The Annual Statewide Exhibit will be on display from Oct. 23 to Nov. 19 at the Downtown Art Center, Wednesday through Sunday, 11 a.m. to 6 p.m. This event is free, and open to the public, but proof of vaccination and a face mask is required. If you can’t make it to Oahu to see this exhibit, there is an online video walk through that can be viewed at bit.ly/3pRngnA.