“I hate the airline industry,” is a sentiment that is generally shared by everyone in the flying public, but unusual to hear from a guy who runs an airline. But then, Richard Schuman, owner of Makani Kai Air, is an unusual person in his own right. 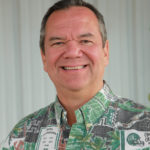 “All these airfare fluctuations,” he says, “are ridiculous. The airlines are gouging people, charging more on Fridays and Sundays, when folks need to fly.” He admits that the price gyrations, which are standard operating procedure for modern airlines, are profit driven, “but to me, that’s the wrong focus. We’re focused on people’s needs.”

Another common airline tactic with which Schuman takes umbrage is the lack of commitment to the customer.

“If a plane is delayed, most airlines just tell customers to go home and come back tomorrow,” he says. “I find that unacceptable.”

That’s why he keeps an airplane on standby to complete the mission if an aircraft has a maintenance or other issue. “No air carrier in Hawaii is as dependable and on time as we are. If it’s raining hard and the airport is closed, we’ll just wait until we can make it in and then fly, even if it’s eight o’clock at night. Hey, people have to get home.”

Schuman’s commitment to the community of Molokai goes back a ways. His great grandfather came to Hawaii in 1891 and his grandmother, Zena Mossman, was raised by the Duvauchelles on Molokai. But Schuman’s understanding of and appreciation for the people of Molokai began in earnest when Makani Kai first started providing air service to Kalaupapa in 2010. In December of that year, the airline was awarded the Essential Air Service contract for Kalaupapa by the Federal Department of Transportation.

“Once you meet the people and learn that your service is an integral part of their lives, you embrace that responsibility. You’re a lifeline, so you’d better be dependable.” Makani Kai has been known to actually return to the airport in Kalaupapa to pick up someone who missed the flight. “No other airline does that,” he says.

In June of 2011, Makani Kai started providing service to topside Molokai and Schuman was impressed by the generosity and giving nature of the new clientele, “Guava butter, Molokai salt, gau gee, avocados, manapua, homemade cookies…our customers bring these things in a show of appreciation for what our people do,” he says. “It’s just tremendous. You never see that happen at the United or Delta counter.”

Although Makani Kai now flies to Maui, that’s where the expansion ends. “I have no desire to fly to the Big Island or even Lanai. Molokai is the center of what we do.”

So, the man who openly declares his disdain for the airline industry is doing his level best to return flying to the way it used to be, the way it ought to be, to that little corner of Paradise we know as Molokai.