Good news may be on the horizon for Molokai air travelers. Hawaiian Airlines has announced that Molokai is one of the destinations it is looking to serve with new turbo-prop aircraft it plans to acquire. In addition, current Molokai service provider Island Air is upgrading its aircraft to allow increased passenger capacity and improved service.

Hawaiian to Expand Neighbor Island Service
Hawaiian Airlines (HA) announced last week that is has signed a “letter of intent” to acquire smaller, turbo-prop aircraft (powered by propeller rather than jet engine) with the aim of establishing a subsidiary carrier to serve airports like Molokai’s Ho`olehua Airport, which are not currently part of HA’s routes. This move is made possible after the company successfully negotiated union agreements for its pilots and flight attendants to operate turbo-prop aircraft, said Ann Botticelli, senior vice president for corporate communications and public affairs.

She called the letter of intent a first step in the process, and said the company could not yet give details about a time frame, specific aircraft or confirmed destinations.

“We’re looking at smaller routes that we can’t currently serve with 123-seat Boeing 717s,” she said, adding that the new planes would likely seat 50 or less.

The last time HA served Molokai was in 2004, when the carrier stopped service because of bankruptcy, said Botticelli. While she said it was too early to say for sure if the airline’s new planes would be serving Molokai, Peter Ingram, HA executive vice president and chief commercial officer, told the Maui News that Kapalua, Lanai and Molokai are “absolutely all on the list.”

For HA, the additional aircraft are “part of our larger strategy to provide more frequency, flights, and price options for our neighbor island system,” according to Botticelli.

“We want to improve access and affordability,” she said. The airlines has already implemented a new fare structure that lowers neighbor island ticket prices by up to 25 percent. The new rates are designed to stimulate kama`aina travel, according to an HA press release.

“We are committed to providing safe, frequent and reliable service that allows our residents to travel more easily between all the islands, and we believe the additional capacity and new fares will encourage that,” said Ingram in the release.

Botticelli said the company has received a positive response from the fare changes — within 3 hours of an email notification sent to frequent fliers, bookings had doubled, she said.

If HA added Molokai to its itinerary, it would join Island Air, Mokulele Airlines and Pacific Wings in providing scheduled service to the Ho`olehua Airport. 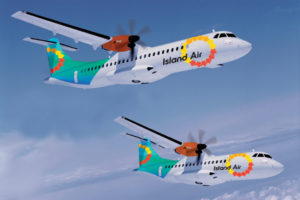 Meanwhile, Island Air announced that it will be upgrading its Dash 8 aircraft as part of a re-branding and image overhaul. Over the next year, the airline will be replacing its fleet with ATR42 and ATR72 aircraft, which are more fuel efficient and carry more passengers.

Island Air spokesperson BJ Whitman said all four of the company’s 30-seat Dash 8 planes — which currently serve Molokai — will be replaced, beginning next month. Two new ATR42s, with a 46-passenger capacity, will be phased in this year, while five 72-seat ATR72s will begin service next year.

“We will be the first to operate this comfortable ATR72 Jet-Prop aircraft in Hawaii and with additional aircraft delivery on the horizon, we’ll be Hawaii’s fastest growing inter-island carrier,” said Lesley Kaneshiro, CEO of Island Air.