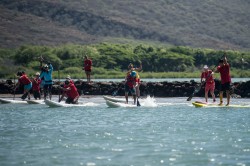 With the Maui to Molokai World Cup of SUP (Stand Up Paddle) race on Saturday, July 13, the idea of the Molokai 4 Molokai (M4M) race the following day was born just eight weeks ago. Its goal was to keep paddlers over on Molokai another day, stimulate the local economy and inspire youth.

With only a short time to throw something together, it almost felt like an impossible task. Stand Up Paddle Association of Molokai (SUPAM) and Youth in Motion made M4M a success with a huge boost from sponsors who came in at the last minute, along with the organizers of the Maui to Molokai race, pledges from the racers and community, local, state and international competitors who believed in the concept. The 8.5-mile course was from Kamalo to Hotel Molokai, and two thirds of the competitors who raced from Maui stayed over for the Sunday’s race.

The weather blessed this event giving good trades, almost perfect conditions and a fun race. The event had two different start lines for the divisions of OC1/2 and SUP. Both SUP and OC1 divisions had prize money for the Men and Women’s divisions from first through third place.

In the OC1, Camie Kimball stormed to first overall, shortly followed by Crystal Egusa and Desiree Puhi. The women rocked on this event with their support and encouragement in making this happen. Jason Aiana took first place in the Men’s division with a $100 check along with some cool prizes and Stephanie Bush and Annette English won the OC2 division.

In the SUP overall and open division, Dave Kissane from Australia took first place, with Kaeo Abby from Oahu hot on his heels in second and Tomo Murabayashi from Japan in third. In the Men’s 14 ft. division, Maui boy Zane Schweitzer clinched first place over Matt Becker from California and Peter Peterson from South Africa. Jeff Chang from Oahu won the Men’s 50+ division.

In the women’s division, it was Oahu’s Jennifer Lee taking firstplace overall, Lina Augaitis from Canada in second but first in the 14 ft. division and Brigette Van Aswegan from South Africa in third overall, and second in the Women’s 14 ft. division. Sharon Look from Maui took second in the Women’s open and Roz Selback took third. Peggy King from Maui won the women’s 50 division.

Locally for the Molokai racers, it was Todd Yamashita who won the Men’s 12’6 division, with Tabitha Puhi taking the Women’s 12’6 division and Boki Chung in second. Young upstart Alex Mawae won the youth division.

Overall, M4M was a huge success with some great vibes. SUPAM brought together a truly international, high caliber field amongst locals while pushing the limits, enjoying the race, fundraising and achieving the original goals and making sure the racers enjoyed their time on Molokai with a memorable event. Stay tuned for the announcement of the dates of 2014.