Last month, Molokai Land Trust’s Anapuka site had a special visitor: a Moli, or Layson Albatross, that landed several times in the area. It’s the first documented landing of the species at the Molokai site since 2017 – and it’s viewed as an auspicious sign that the Moli may be making a home at Anapuka in the next few years. 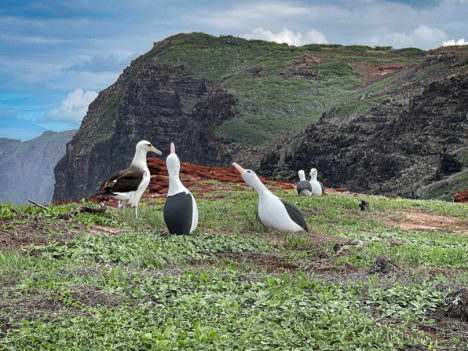 The Moli landed at the organization’s “social attraction site,” which features decoy Moli in an effort to attract the real birds to the area. The decoys have now showed success, along with Molokai Land Trust’s work to restore the Anapuka dune ecosystem, remove invasive species, repopulate native plants and install predator-proof fencing to create a safe haven for Moli and other ground-nesting seabirds, according to MLT Executive Director Butch Haase.

“This is a really rare opportunity to be on site during a visit by a Laysan Albatross to the decoys. It was even more rare to be in the decoy site during a landing with other individuals all capturing video and stills with their phones,” MLT posted on their Facebook page. “This was an event where everything came together in a magical way, and we all felt blessed to experience it. We have been dreaming about this event for quite some time now, it is really exciting seeing it come to fruition!”

The Anapuka social attraction site was set up in 2017 with the help of partner organizations.

“We had a documented landing within 10 days of the initial deployment of the social attraction site, a record response time according to our State partners at DOFAW,” said Haase. “This is the first documented landing at the site since that time, although we have documented many flyovers by both Laysan Albatross (Moli) and Black Footed Albatross (Ka`upu).  Our partners at the USFWS Coastal Program feel that we could see the first nesting activity in as soon as two years.  At that time, we will have completed the expansion of the project area to include 90 acres within the new predator proof fence.” 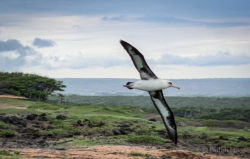 Moli have wingspans of about 6.5 feet and are long-lived, with the oldest known individual identified by her left tag at 65 years old. The seabirds are also monogamous, mating for life and generally returning to nest at the location they hatched. Almost all Moli live in the Northwestern Hawaiian Islands, with small populations expanding to nest on Kauai and Oahu in recent years. Haase said the habitat expansion is likely due to the effects of sea level rise and inundation of nesting areas.

“We have already seen the loss of landmass in the Northwestern Hawaiian Islands due to severe hurricane impacts,” explained Haase. “We can expect to see more of these types of activities as the impacts of climate change become more pronounced.  Because the Main Hawaiian Islands are the next closest landmass for future displaced ground nesting seabirds in the Central Pacific, it is vitally important that we have suitable habitat in place at that time.”

Molokai Land Trust’s work has been paying off, with an increase in native species as the environment is restored. 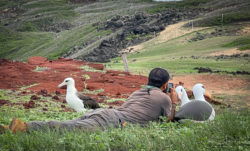 MLT Project Coordinator Josiah Ching had a close encounter as a real Moli approached the decoys. Photo by Butch Haase.

“Two years ago in 2020 we had the first two wedge-tailed shearwater (`U`au Kani) chicks born and fledged at Anapuka, and this past season we saw seven chicks born and fledged,” said Haase. “As the quality of the project increases over time we are seeing more positive wildlife responses which is a wonderful sign.  Even our endangered pollinators like the Hawaiian yellow face bees (YFB) are showing signs of expansion throughout the project as more native forage and nesting habitat is created.  We have documented two species of YFB on site and a third species may also be present.  It is not unusual to be able to see a rare YFB pollinating a rare `Ohai blossom on site!  I think the project is a wonderful example of the concept, ‘build it and they will come.’”

For the Moli that soared and swooped over Anapuka last month, repeatedly alighting on the cliffside, MLT staff hope more will indeed come and make Molokai a nesting site.