Farmers Football gears up for the season 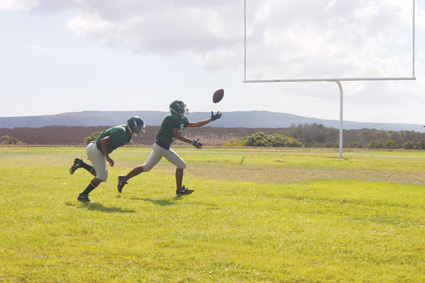 Freshman Kaimana Kahale reaches for a pass as senior David Pascua-Kahookano gets ready to tackle during practice. Photos by Leslie Hibner.

Wiwo`ole. Kupono. Lokahi. These three words are chanted at the beginning of each game and are values expected from each of Molokai High School’s (MHS) football student athlete. It reminds players to be fearless, to be disciplined and to be unified — three principles as crucial to football as they are to life, according to Hanohano Naehu, assistant coach and defensive coordinator.

“If they can be those three things, then they can play for [us] and we are going crush whoever we go against,” said Naehu. “These are the na koa, our modern-day warriors that we send to represent us.”

On Sept. 14, the MHS football team will kick off the season with their first official Maui Interscholastic League (MIL)-sanctioned game against Seabury Hall under the Friday Night Lights at War Memorial Stadium. 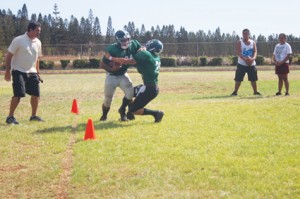 Training Hard On and Off the Field
Every day after school, the 31 boys on the team practice at the MHS field from 2:30 to 5 p.m. They run warm-up drills, work on conditioning and practice plays. As safety is the number one priority, according to Head Coach Michael Kahale, they have been practicing a new, calculated approach to tackling.

“Because there is no feeder program, the game of football is a new experience for a lot of these boys,” said Kahale, who played college football for four years at University of La Verne in California. “A lot of teaching needs to take place, and a lot of patience through that teaching.”

This year, they have 17 new players on the team, including eight freshman.
“We practice hard, keep our attitudes good, and humble ourselves,” said MHS senior David Pascua-Kahookano, who plays defensive linebacker.

Freshman Ena Victorino, who plays quarterback, said he is both excited and nervous for the upcoming game at War Memorial. He has played club football for Kahale the past two years, and said he is focusing on improving his footwork and remembering the plays. “I just try to stay calm, no hesitate,” he said. 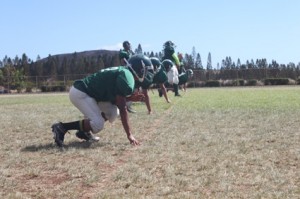 For the past two years, before it was MIL-sanctioned, MHS football played as an eight-man club through an agreement between private schools St. Anthony and Seabury High, with Hana High joining the league this year. The club had to raise all of their own funds for equipment and travel – a total of over $41,000 over the past two years –through fundraisers and donations from the community.

With MHS sponsoring the team now, they were able to install two brand new field goal posts at their field located across the street from the Barn, which will help the boys practice their kicks and punts, according to Kahale.

Making sure the boys work just as hard in class as they do on the field is also a priority for Kahale. He does personal grade checks with each of the boys, making sure everyone on the team keeps their grade point averages above a 2.0.

“One of the greatest rewards is to see an improvement in grades in many of these athletes,” said Kahale. “Football gives these young men the incentive to stay on track academically.”

He hopes what they learn on the field will stick with them.

Long History of Farmer Football
The last time Molokai had a high school football team was in 1961 under the leadership of athletic director George Tamura and head coach Kazuto Nogami. Since then, there were several attempts to bring football back to Molokai, but funds were always short.

But that didn’t stop Kahale and his wife Nichol from drafting a strategic plan with the support of MIL executive director Joe Balangitao and former MHS Athletic Director Camie Kimball. Eventually, Kahale hopes to secure enough funding in the future to start an 11-man football team and attract college recruiters to scout MHS games, he said. After all, MHS’s own Kimo “Scooby” van Oelhoffen (class of ’89) went on to play professional football for the NFL. He was drafted by the Cincinnati Bengals in 1994, and went on to play for the Pittsburgh Steelers, New York Jets and Philadelphia Eagles.
But funding is still the biggest challenge for the MHS program.

“We’ve always had the kids and the ability, but we’ve never had the money,” said Naehu. Even with the MIL sanctioning football this year, the program only has enough money to sponsor travel expenses for 20 of the 31 athletes and three of the eight coaches. The rest of the money –an estimated $6,736 –must be raised by the team with community fundraisers.

“We’re going to do our best to keep football because the kids are so excited,” said MHS Athletic Director Hoku Haliniak. The athletic department’s annual budget for travel expenses is over $10,000 short, so Haliniak is asking the community to continue to show support for MHS athletics.

MHS Football is currently selling T-shirts for $15 and up. To order, contact a team member or visit Molokai High School Football’s Facebook page.

One Response to “Modern Day Warriors”