Ten years ago, six Molokai musicians assembled to showcase the island on Maui at an event at the Queen Ka`ahumanu Center. The group, which stayed together afterwards and became MoBettah the Band, celebrated a decade of entertainment, music and friendship with an anniversary concert at Paddlers Inn last Friday.

“We played for 13 hours that weekend on Maui,” remembered Tania Manaba-Will, lead vocalist and ukulele, timbale and tambourine player. Since then, the band has become a way to give back and share music and “encouraging messages” with the community, Manaba-Will said.

“We all have full time jobs on Molokai but our passion is our music,” said guitarist Rick Schonely, another of the four original band members still in the group. “When we get together we have a good time, we hope that the fans have a good time and it seems to work.” 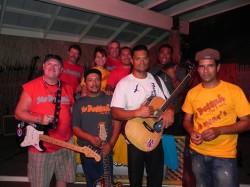 MoBettah the Band former, current and guest musicians at their anniversary concert. Photo by Wayne Finley

MoBettah is a local favorite and has played regularly at Paddlers Inn, Hotel Molokai and public and private events, as well as occasionally at off-island locations, including the Ward Warehouse on Oahu and the Maui Tropical Plantation. Known for entertaining audiences with a wide variety of music — from rock and reggae to country — MoBettah musicians are known for having a lot of fun on stage and drawing listeners to the dance floor with favorites like “Mustang Sally.”

While many fans enjoy the band for their signature sets, MoBettah members say they’re always up for trying something new, even though they never practice as a band.

“We wing it and chance new songs on stage,” said Schonely. “That’s what music is all about — creating as we go.” “We’re more entertainers than musicians,” chuckled Lyndon Dela Cruz, lead vocalist and ukulele player. “We just shoot from the hip.”

The band — which is now comprised of Manaba-Will, Schonely, Dela Cruz, Earl Gorton on drums, Danny Reyes on bass and Oscar Ignacio on vocals and guitar — played for a pumped crowd Friday night and enjoyed a reunion with former band members. Original bassist Art Hew Lin and former vocalist and acoustic guitarist Ekolu Kalama returned to Molokai for the event. Other former members also include Moke Reyes and Bruiser Paleka.

“I would look at this as our biggest achievement: we still have fun together,” said Gorton in a previous Dispatch interview.

“Every single gig we do, we come together… and aloha each other,” said Manaba-Will of the members’ close bond. “I’m just so blessed to have these dear friends, and that’s a memory for me every single night.”

With a decade past, MoBettah members have no plans to slow down. “It’s fun to play, and when it stops being fun, I don’t want to keep playing,” said Dela Cruz, predicting that won’t be coming any time soon.

“The MoBettah train keeps on rolling,” said Schonely. The band is available to play at community and charity events as well as parties; contact one of the band members to reserve a good dose of the band’s music and entertainment.