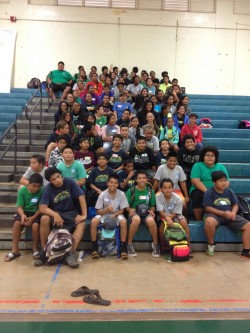 All of the sixth graders on the island converged in the Molokai Middle School (MMS) cafeteria for a fun day of activities created and led by the MMS student government on May 28.  It was the second and last transition day for sixth graders, designed to introduce the students from different elementary schools to each other and to middle school life.

The student government of MMS showed true leadership skills and planned a day of fun activities, a tour of the school, and introductions to people such as Principal Dawn Mains and Aunty Tikka, the cafeteria manager, who provided everyone with ono cinnamon rolls!  Great job MMS leaders and good luck new seventh graders, the class of 2021! Photos by Alison Place.