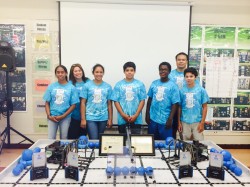 The Robot Skills Champion Award goes to the robot with the highest solo score in the tournament.  Our boys scored 98 points on their first try, and went unchallenged for first place the remainder of the tournament, followed by second place Island Pacific Academy Boys with 71 points.

The Teamwork Champion Award goes to the two-robot alliance with the highest combined score in the tournament.  Our boys scored 138 points for first-place in partnership with Island Pacific Academy Boys, a season-long ally and brother-school.  Our girls scored 93 points for third place in partnership with Island Pacific Academy Girls, also a season-long ally and sister school. 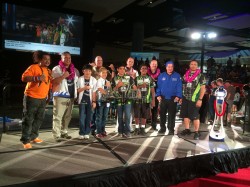 We again express our mahalo and aloha to not only all of our supporters and sponsors of our trip to the World’s Championship in Anaheim back in April, but also to our sponsors of the International Summer Games in July including Jewell K. Kanaha and the late Masami Fukuoka; Queen Liliuokalani Children’s Center; and the County of Maui, Maui Economic Development Board, and Ke Ala Hele Education Fund.