For 90 years, Misaki’s Grocery and Dry Goods has served at least six generations of Molokai residents in a family-operated business that itself spans four generations. From a tiny candy store in the present-day Molokai Fish and Dive building in downtown Kaunakakai to one of Molokai’s largest grocery stores, Misaki’s has been vital to island life and economy for nearly a century. 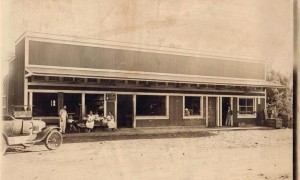 The original Misaki’s shop, across the street from the present-day store. Masataro Misaki standing on the left, Uta seated, with three of their children and family friends on the right. Photo courtesy Irene Iwane.

It all started in 1922, when Uta Misaki, a seamstress, opened a 10-by-20-foot shop to supplement the family income. Along with sewing services, the store sold candy, ice cream and a few other items. Uta was soon joined in the business by her husband, Masataro, said his grandson Kevin Misaki, present-day Misaki’s general manager.

Irene Iwane, Uta and Masataro’s daughter, said she remembers her mother “cutting aloha shirts by the dozen.” The family — Iwane had five siblings, including Kevin’s father Mike — lived on Mango Lane behind the store.

Iwane said her job was to sweep the store and street front every day, recalling the task with no fondness.

Masataro came to Molokai in 1920 as a plantation worker, having worked on Kauai and Maui, with dreams of making it as a commercial fisherman. But before long, the family’s store became invaluable to fellow residents, and the small corner shop grew — one addition at a time — to extend along the block to Mango Lane.

From candy, the store expanded to offer food items and canned goods, and everything from “clothing to fishing supplies to animal feed,” according to Kevin. The family’s Model T Ford (“we were among the first to have a car [on Molokai], said Iwane) was used to deliver rice and other goods to households all over the island, she said.

“Dad’s car also used to be used as the hearse,” Iwane recalled. “I used to be so scared of riding in it, but we still used to jump on every weekend” to make deliveries with their father, she laughed.

“[The community] treated Mom and Dad like a king and queen,” said Iwane, because of the essential service they provided.

In 1960, the Misaki’s store moved across the street to its present location, according to Kevin, in a building Masataro built. Kevin’s uncle Richard was the manager at the time, while Mike worked in the meat department as the butcher. Iwane recalled when Mike began raising his own pigs to supply the store. Several years later, they built the warehouse that sits behind the store, allowing them to better stock goods and have a buffer in case the barge was delayed.

Meanwhile, Kevin graduated from University of Hawaii, and while he planned to specialize in ocean resource management, he switched to graduate with a degree in marketing after he decided to come home to help with the family business. By then, his dad had bought out Richard and became owner, while Kevin came on as manager. 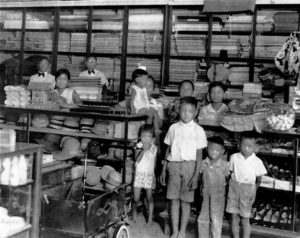 In the old days, said Kevin, the pineapple plantation was the island’s main employer. Back then, Misaki’s operated largely on credit, and families would come back to pay their tab after they received their bi-monthly paycheck.

“We were appreciative of people who’d pay,” said Kevin. Some never did, but the store continued to support local families. He said they still serve a few old-timers on the credit system to this day, though they don’t allow new accounts.

Misaki’s Today
For many customers, it may seem like Misaki’s has been around forever, but for Kevin, he said he hardly noticed 90 years have passed since his grandparents started the business.

“We are so stuck in our daily routine, we forget how fast time flies,” he said. “Ten more years will be here in no time.”

The past few years have seen many store upgrades. In 2009, a new refrigeration system was installed to better store and display fresh produce. Electronic cash registers bring updated technology to Misaki’s cashiers and customers. Most recently, Kevin said a 27-camera surveillance system installed in the store last February has been useful in more ways than one — from preventing shoplifting to assisting the community and police in sidewalk theft outside the store. Roof repairs and internal renovations may be less noticeable to shoppers but essential to keep the historic building intact.

Kevin said the next improvement planned is a 20-foot ice cream freezer to be located on the back wall by the bulk section. The appliance is already on-site, but Kevin said instead of bringing in an off-island electrician, they’re waiting to hire local workers to do the installation.

While that may take longer, “that’s the way the island runs,” explained Kevin. “We want to give business to people here.”

Misaki’s currently employs about 25 residents, according to Kevin. That number has been steadily increasing from the one-person operation back in 1922. In a June 29, 1972 article in Molokai’s newspaper “Ka Molokai” celebrating the store’s 50th anniversary, the paper notes 15 full-time and five part-time employees.

Another 90 Years to Come?
Kevin credits the business’ success to the community who has supported them, as well as being able to keep costs down.

“We treat people fairly and charge fair prices,” he said. “A lot of people tell us our prices are actually cheaper than on Oahu.” He said the fact that they own their property and don’t have to pay rent makes a big difference in saving overhead expenses.

But while the store is still thriving, Kevin foresees some tough decisions ahead, with the store’s future lying at least partially in the hands of the next generation.

“I’m 57, one son works with me here, and another two are in college. It’s a hard business and I wouldn’t force it on anyone,” said Kevin.

He describes the next 10 to 15 years as a turning point for many similar local establishments.

“There will be big decisions by a lot of businesses in town” because family youth don’t always want to carry on family operations, according to Kevin.

For Misaki’s, the options will come down to either selling the business or passing it on to his children.

“We will keep it going no matter what,” he promises.

And, after all, the store has served some of their customers’ great great grandparents.