Misaki’s Celebrates a Century in Business 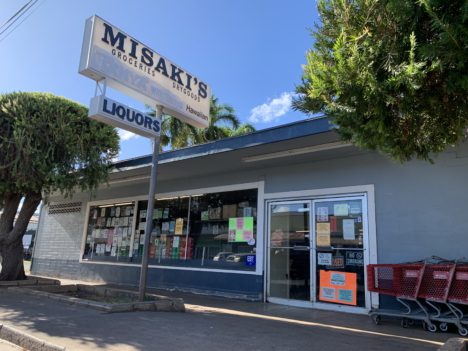 One of Molokai’s iconic and longest-standing stores celebrates 100 years in business this month. From a tiny candy store in the present-day RWH Chen Building in downtown Kaunakakai to one of Molokai’s largest grocery stores, Misaki’s Grocery and Dry Goods has been vital to island life and economy for a century.

“For most of us, it’s just something we do — it’s our life. Time just passes by so fast,” reflected General Manager Kevin Misaki, whose grandparents founded the business. He “practically lived” in the store growing up, and so did his kids.

And for the Molokai community, it feels like the store has always been here for their ‘ohana.

“There’s families we know of that have been shopping with us at least seven generations,” said Misaki.

His secret to staying in business for a century?

“Having great customers and treating them well,” said Misaki simply. “The way a store works, you just gotta do things over and over again — selling the same product every week, and being nice to customers so they return.”

It all started in 1922, when Uta Misaki, a seamstress, opened a 10-by-20-foot shop to supplement the family income. Along with sewing services, the store sold candy, ice cream and a few other items. Uta was soon joined in the business by her husband, Masataro.

Irene Iwane, Uta and Masataro’s daughter, said in a 2012 Dispatch interview she remembers her mother “cutting aloha shirts by the dozen.” The family — Iwane had five siblings, including Kevin’s father Mike — lived on Mango Lane behind the store.

Iwane said her job was to sweep the store and street front every day, recalling the task with no fondness.

Masataro came to Molokai in 1920 as a plantation worker, having worked on Kauai and Maui, with dreams of making it as a commercial fisherman. But before long, the family’s store became invaluable to fellow residents, and the small corner shop grew — one addition at a time — to extend along the block to Mango Lane. 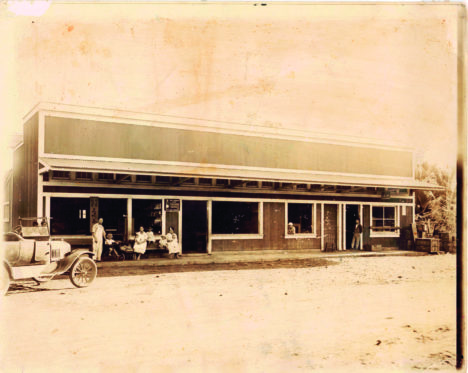 Misaki’s then and now. At left, Mastaro and Uta Misaki and children in front of the original Misaki’s shop, across the street from the present-day store. Photo courtesy Irene Iwane.

From candy, the store expanded to offer food items and canned goods, and everything from “clothing to fishing supplies to animal feed,” according to Kevin. The family’s Model T Ford (“we were among the first to have a car [on Molokai], said Iwane) was used to deliver rice and other goods to households all over the island, she said.

“Dad’s car also used to be used as the hearse,” Iwane recalled. “I used to be so scared of riding in it, but we still used to jump on every weekend” to make deliveries with their father, she laughed.

“[The community] treated Mom and Dad like a king and queen,” said Iwane, because of the essential service they provided.

In 1960, the Misaki’s store moved across the street to its present location, according to Kevin, in a building Masataro built. Kevin’s uncle Richard was the manager at the time, while Mike worked in the meat department as the butcher. Iwane recalled when Mike began raising his own pigs to supply the store. Several years later, they built the warehouse that sits behind the store, allowing them to better stock goods and have a buffer in case the barge was delayed.

Meanwhile, Kevin graduated from University of Hawaii, and while he planned to specialize in ocean resource management, he switched to graduate with a degree in marketing after he decided to come home to help with the family business. By then, his dad had bought out Richard and became owner, while Kevin came on as manager.

In the old days, the pineapple plantation was the island’s main employer.

“Almost everything was done on credit,” said Kevin. “We were so tied into the plantation, everybody would charge items, and when they got paid, they’d come to the store and pay their bill for the month.”

While hard work and customer service remain central to Misaki’s operation, prices are one of the biggest things to change over the years.

“It’s almost unbelievable… We found an old bill… 300 pounds of poi from old poi shop… it was $15. Considering how long we’ve been doing this, it’s kinda crazy how the prices have changed over the years,” said Misaki in a 2017 interview.

The store has also seen a number of upgrades in recent years.

In 2009, a new refrigeration system was installed to better store and display fresh produce. About five years ago, the store got a new freezer for pizza and ice cream, along with a 30-foot refrigeration unit for milk and drinks. A couple of years after that, Misaki’s cash registers received a major upgrade. In the last couple of weeks, the store got a fresh coat of paint inside and out.

Other new equipment is on the back burner because of supply chain challenges across the board since the pandemic.

“It’s been so hard — we’ve waited two years to get a new forklift,” said Kevin. ‘And we’ve been trying to get new fridges for two years…. Even though we have the funds to make the changes, the supply chain is affecting big items, as well as groceries… we gotta grab whatever we can from distributors a lot of times just because things aren’t available.”

COVID also affected 100th anniversary plans. Originally envisioning a celebration with food, entertainment and prizes, Kevin is opting instead for a two-week sale of specialty items like folding tables, storage containers and cooking appliances, followed by a drive-thru dinner to give away 1200 plates on Aug. 20.

Though Kevin isn’t sure what the future of Misaki’s will hold, he knows he doesn’t want to burden anyone with an unwanted responsibility.

“I never want to force this on anybody, it’s too hard of a job,” he said. One of his three adult children currently works in the store, and he told his other two they can always come back, if they want to.

“Everybody put in a lot of work,” he said of his hope that the store will be carried on. “We practically lived here.”

In addition to loyal customers, Kevin wanted to thank the employees that have worked for them.

“We appreciate their dedication, some of those workers have become family to us,” he said.

Through all the challenges, the most rewarding part of owning the store is being part of people’s daily lives, according to Kevin.

“When you’re in a grocery store, you get to see a lot of customers come to the store… it’s part of their daily life,” he said. “Seeing people, talking story with them every day, you become part of their family a lot of times. Just by interacting with them, it’s one of the greatest parts of being in a grocery store. I know customers that come here, they might just buy one or two items, but for them, that is their routine. This is where they interact with other people, where they come to see everyone.”

In the meantime, it’s just another day in Misaki’s.

“You just gotta get back to basics, you gotta bring in what people want, and treat them well. Nowadays people want ease of cooking, a lot of things are pre-made nowadays,” said Kevin. “It’s just about finding what everyone wants and selling it at a decent price.”