For the first time in school history, Molokai hosted the boys’ Division II basketball Maui Interscholastic League Championships from Feb. 18-20, and with it, came the Farmers’ final shot at the state championships. Five teams competed in The Barn, with Seabury Hall claiming the league title and a berth at states.

In the opening game on Feb. 18, Molokai kicked off the tournament with a resounding 58-48 win over Hana. 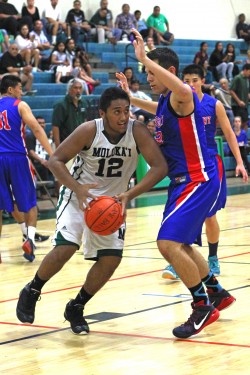 After being down for most of the first quarter against the Dragons, Molokai pulled ahead on sophomore guard Michael Sterner’s three three-pointers. All of the Farmers were shooting well, and Molokai led 28-21 at the half.

“Michael’s coming around,” said Head Coach Carl Adolpho, Jr. “All season we’ve been telling him to put the ball up as much as he can.”

The Farmers took advantage of Hana’s offensive woes to hold a 49-31 lead after three quarters. However, the Dragons mounted a 15-2 run and were down only 51-46 with two minutes in the game. Hana was forced to foul, allowing the Farmers to finish the victory at the free throw line.

“I think we were able to control the pace of the game,” said sophomore guard Jershon Kaalekahi. “We were able to make not all, but most good passes.”

Sterner led the team in scoring with 14 points, while sophomore guard Edel-Mark Alvarez and freshman forward Kaina Adolpho each brought in 11.

On Thursday, the Farmers fell to Seabury Hall 64-46 but not without a fight. Molokai started off strong against regular season champion Seabury, keeping within five points of the Spartans in the first quarter.

“We had a lot of intensity,” said Assistant Coach Manu Adolpho, Carl’s son. “We came out and our boys instituted their defense exactly how they were supposed to.”

Junior forward Moses Espaniola said the team’s fast-flowing transition between offense and defense kept them in the game.

“We got very key rebounds … and we had really good transitional buckets. That’s what really put us up,” said Espaniola. “… Since Seabury is very tall and long, we tried to spread them out a little more, give the guards little bit more room to work with.”

In the second half, Seabury pulled away on a tight man defense and strong shooting, led by 17 points from perimeter specialist Cameron Hanisch and 13 from Jordan Haylor. The Farmers were patient with their passing and found occasional holes to score but committed multiple fouls.

“[Seabury] kind of ran away on the free throw line,” said Manu Adolpho. “That and just a few mental errors … really put us in the hole.”

Molokai’s top scorers were Sterner with 13 points, and senior forward Tani Aikala-Falealii with 12. 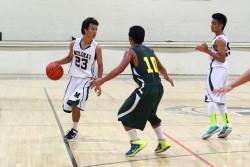 Michael Sterner (23) was Molokai’s top scorer during the tournament. Photo by Colleen Uechi.

That same day, Lanai advanced to the championship game after defeating St. Anthony 64-57. The Pine Lads later fell to the undefeated Spartans 59-49 to give Seabury the crown and the division’s only place at states.

“I don’t think they were the first, but it [had been] a long time since Molokai [had] hosted any MIL championships,” said Haliniak last week through email. “Every AD has a choice to host when their rotation comes around. … If calculated correctly, Molokai should be hosting something every year.”

Aside from giving a financial break to Molokai, which has to travel for most of its games, home tournaments allow fans the chance to see games normally played only on Maui, according to current AD Lee DeRouin. He coordinated the arrival of the nearly 90 players, coaches and trainers who came on island for the boys’ tournament.

The Farmers finished the season with a 4-6 record, improving their win percentage from last year when they were 3-9. Both coaches and players are excited about next year’s prospects within the league. Espaniola said the other four MIL teams have rosters full of graduating seniors, giving a relatively young Molokai squad an advantage for next year.

“A lot of our players are underclassmen and they all have a lot of experience playing,” said Carl Adolpho, Jr. “We made sure that we got them some playing time each weekend.”

Seabury will advance to the boys’ Division II state championships on Oahu from Feb. 26-28. Meanwhile, the Farmers will go to work in anticipation for another season.

“As coaches we never doubt their skills and their knowledge of the game,” said Adolpho, Jr. “We’re thinking along the line of getting the mentally focused. We lose a lot of games just by silly mistakes, so that’s what we’re trying to focus on, that mental toughness.” 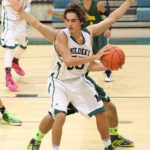 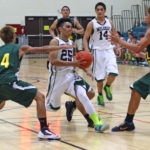 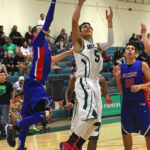 Moses Espaniola slips past Seabury defenders for the lay-up. Photo by Colleen Uechi.