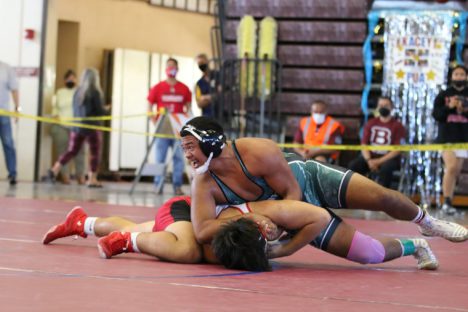 Molokai wrestlers came out on top in the Maui Interscholastic League Championships last weekend, with two Farmers bringing home championship medals and others taking high honors on the mat.

The team had 11 athletes qualify for the upcoming state tournament, with both boys and girls teams taking third place overall at MILs.

Along with Simon and Kalipi, Austin Kaalekahi at 106 pounds, Mana Kanuha at 138, Kuulei Simon at 127, Elisha Horner at 182 and Heno Kalama at 195 will also be competing at the state level.

“Our kids improved and did what they needed to do today,” said Manley of the MIL event. “Some of them beat opponents that they have not beat all season. The coaches are happy with the overall performance and look forward to the state tournament this week.”